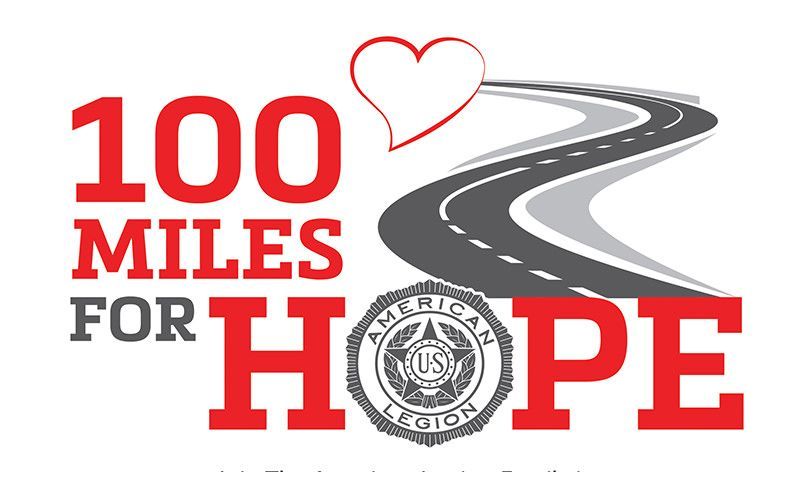 More than 4,800 American Legion Family members and others joined the inaugural 100 Miles for Hope challenge, raising about $150,000 for the Veterans & Children Foundation (V&CF).

American Legion National Commander Bill Oxford kicked off the campaign from his North Carolina home in early August. The challenge asked participants to cover 100 miles by walking, cycling, running or other means in the 100 days concluding on Veterans Day.

“When I set out on my first steps for the 100 Miles for Hope challenge on Aug. 3, I was optimistic about how American Legion Family members would respond,” Oxford said. “Now, 100 days later, I am overwhelmed by the response, enthusiaism and number of participants.”

Oxford mentioned Charlie Parker, a 75-year-old Navy veteran who uses a wheelchair. “Not only did he complete his 100-mile mission by swimming, he was able to raise additional funds for the V&CF by having individual sponsors donate.”

• Florida Legionnaire Wes Singletary, who spent two weeks in August in the hospital fighting off COVID and then completed his 100 miles with his puppy, Copper.

• Trish Carlisle, the Department of Arizona chaplain, who rode her mule, Bella, for 100 miles.

Many participants who joined the challenge committed to a healthier lifestyle beyond their 100 miles.

Teresa Ash, a vice commander in the Department of Minnesota, quit smoking and got her whole family involved. Kevin Motter, adjutant of American Legion Post 109 in Montpelier, Ohio, “was in a bad place” in early August. Now, he has shed more than 21 pounds and covered more than 1,000 miles as he used his stationary bike every day.

Not only did the participants benefit. So, too, did the veterans and children in need who receive vital assistance from The American Legion’s V&CF.

The foundation provides necessary funds to train and support The American Legion’s network of more than 3,000 accredited service officers who represent veterans, free of charge, with their benefits claims and other needs. Additionally, military families facing financial crises are eligible to receive Temporary Financial Assistance, which is funded by American Legion Veterans & Children Foundation donations.

Oxford said that plans are underway for the second annual challenge, following up on the success of the 2020 campaign. The second 100 Miles for Hope challenge is tentatively planned to begin on American Legion Birthday in March. Details on the enhancements to the campaign will be announced in the coming months, Oxford said.

“In the meantime, keep up your walking, running, cycling, swimming, kayaking, canoeing or even mule riding,” he said.