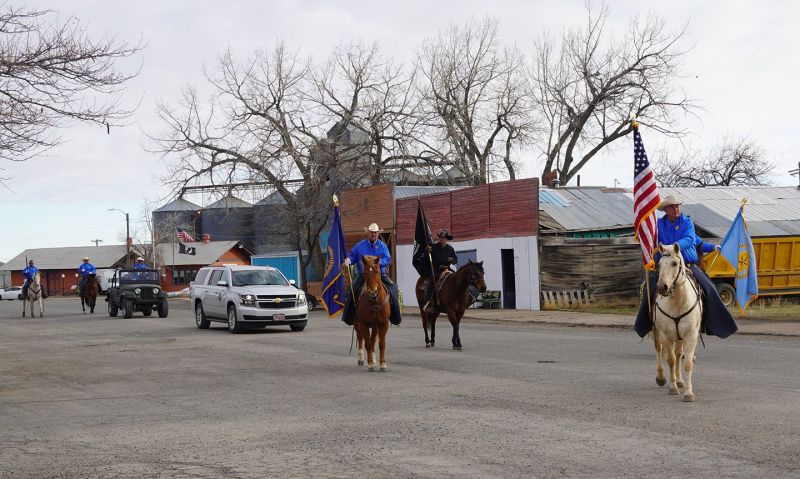 In a scene that resembled an old western, American Legion National Commander Bill Oxford was surrounded by horseback-riding American Legion Family members as he was led into the historic ranching town of Geraldine, Mont., March 21.

While it’s not uncommon for American Legion Riders to escort the national commander, the riders of the Geraldine Painter Brothers Post 102 Mounted Color Guard prefer organic horsepower over Harleys. “I have had a lot of escorts on my travels but this was unique,” Oxford told Legionnaires attending the Department of Montana Three Rivers District 8 meeting. “Being led by horseback is an experience unique to Montana. Every post that I visit in The American Legion has its special characteristics. But they all care about serving veterans and their communities.”

The message that Oxford delivered in Geraldine was the same as what he said a day earlier to District 9 in Roy, Mont. “We have to get a handle on veterans’ suicide,” Oxford said. “We need to continue Buddy Checks to help veterans cope with the isolation caused by the pandemic and issues that are related to their military service. The suicide rate is much lower for veterans who get in the VA system and receive help. We need to do everything we can to encourage vulnerable veterans to get the help that they need.”

In a news interview broadcast by local affiliates in markets throughout state, Oxford reiterated the need for veterans to seek help in a state where one in five suicides are committed by veterans.

“When we think about veterans, we’re a stubborn group (with an) unwillingness to reach out and ask for help. We just want every veteran to know, hey, we’re still here, we want to help, we can help but you got to let us.”

The national commander’s visit marked the end of an era for longtime Department of Montana Adjutant Gary White, who will be retiring after 19 years on April 1. White, a retired Army commander sergeant major, intentionally sought to include smaller communities as part of Oxford’s itinerary.

“Roy has a population of less than 100, yet Post 96 has 26 members. Think about that!” White said. “The post is led by young veterans and they have achieved 113 percent of their goal. Geraldine has a population of less than 200, and its post has 108 members as of today. There are a lot of miles in Montana and members travel long distances to be active in The American Legion.”

The 147,167 square miles of Big Sky Country is dotted with an American Legion presence in even the most remote areas. Since 1952, American Legion posts throughout the department have placed approximately 1,500 cross-shaped markers on Montana roads and highways to symbolize an estimated 3,300 fatalities. Since some accidents caused multiple deaths, the markers are not intended to be a tribute to an individual but more of a warning of possible hazards.

“Our highway fatality markers are not memorials, but are instead safety reminders,” said Department of Montana Commander Jeff Nelson. “When I pass one of those markers, I’ll look again in my rearview mirror and maybe pay more attention to the speedometer. Not every fatality has a marker, since some accidents cause multiple deaths.”

Baseball is another program in which Montana’s young people rely heavily on The American Legion. Due to long and harsh winters, high schools do not offer opportunities for students to play America’s national pastime. Though the playing seasons are shorter than what can be found in many southern departments, Montana conducts a robust American Legion Baseball program, which includes eight Canadian-based teams. American Legion Baseball is viewed as “the only game in town,” according to the department.

Additionally, the department hopes to instill patriotism among young people by encouraging the legislature to pass a bill which would require the presence of an American flag in every Montana classroom.

“It’s important for young people to see that flag and remember the sacrifices that have been made on their behalf,” White said. “Americanism is one of the pillars of The American Legion, so this is an issue that we think is very important.”

The Montana American Legion is also trying to convince lawmakers to exempt military pensions from state income tax. “We are one of the few states that still taxes military retirement,” White explained. “We believe that exempting these pensions would create a major incentive for veterans to move to Montana. It would send a message that Montana is veteran-friendly and still increase revenue for the state in other areas.”

While Oxford’s travel tempo has not reached its pre-pandemic level, the Montana tour came on the heels of department visits to Iowa, Nebraska and Virginia. “Every department that I visit has shown great hospitality,” Oxford said. “We are not done with coronavirus yet, and I encourage all Legionnaires to get the vaccines, practice social distancing when they can and be safe. Even while doing all of these things, American Legion Family members still find ways to serve their communities and strengthen America.”