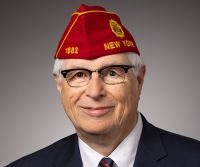 American Legion Charities benefits various programs and charities focused on the men and women who have served The United States of America in its armed forces, and the families who support those servicemembers.