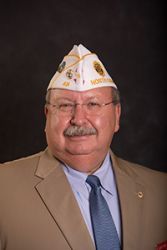 (See Article I, Section 5, of the National By-Laws of The American Legion.)

Assigned to the Finance Commission for supervision and coordination are: