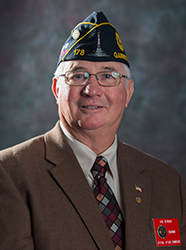 • To formulate and recommend policies and to oversee the implementation of adopted policies relating to activities conducted for organizational purposes, including but not limited to such policies as do not properly come within the scope of any other national commission;

• To review and give guidance to the necessary administrative operations of the National Headquarters;

• To recommend policies and procedures relating to trophies and awards given by the national organization in connection with American Legion activities;

• To act on all nominations for the American Legion Distinguished Service Medal and report recommendations to the National Executive Committee;

• To be responsible for the contents of the Manual of Ceremonies, promotion of the use of the manual, the proper wearing of uniforms, caps, regalia, official badges, etc.;

• To review and recommend to the National Executive Committee, recipients of the International Amity Award and the Canadian Friendship Award;

• Such other purposes as may be assigned to it by the National Executive Committee.

• To work in concert, as directed by the Internal Affairs Commission, with American Legion posts, districts and departments as needed to build awareness and support of the Legion Rider program and the annual Legacy Run;

• Such other purposes as may be assigned to it by the National Executive Committee.