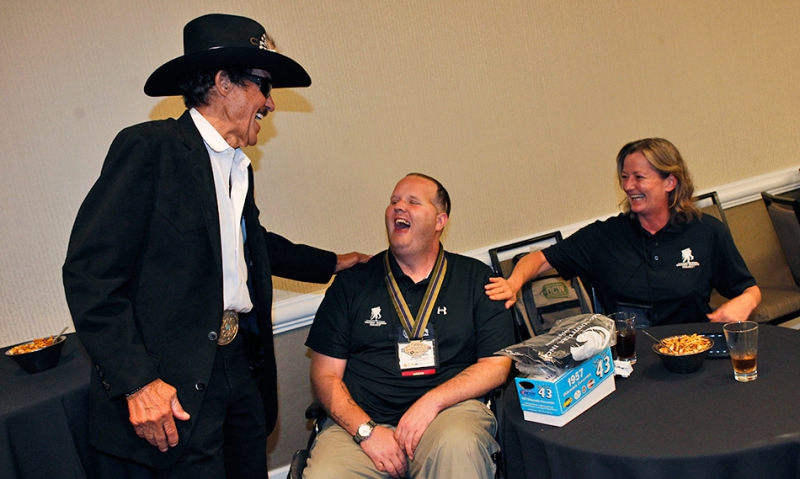 Richard Petty visits with wounded warriors and their families before receiving the Good Guy Award during the PDCC Luncheon at the 96th American Legion National Convention in Charlotte, N.C., on Monday, August 25. Photo by Tom Strattman/The American Legion

Praised for his patriotism and his service to the community, NASCAR Hall of Famer “The King” Richard Petty was presented The American Legion’s James V. Day “Good Guy” Award during the The 96th Annual American Legion National Convention today.

“Richard Petty is so much more than just a former race driver and now current team owner,” American Legion National Commander Daniel M. Dellinger said during an award luncheon held in Petty’s honor at the Westin Charlotte by The American Legion Past Department Commander’s Club. “He is a great American, who is always giving back to the community. By donating his land, and more importantly, his time, to Victory Junction, Richard has helped chronically ill children receive life-changing camping experiences.

“He and his son Kyle have helped educate young people about the safe use of automobile lifts, and he has donated time to Civitan International. Richard Petty Motorsports has also supported paralyzed veterans. The NASCAR culture is often praised for its patriotism. Well, it’s no coincidence that Richard Petty is The King of NASCAR.”

“It’s an honor to be recognized by the American Legion,” Petty said. “I’ve also felt it was important to do my best to give back to the community and to those in need. It’s just something small we do to help out and hopefully make people’s lives better or make them feel good. It’s humbling to be rewarded for it.”