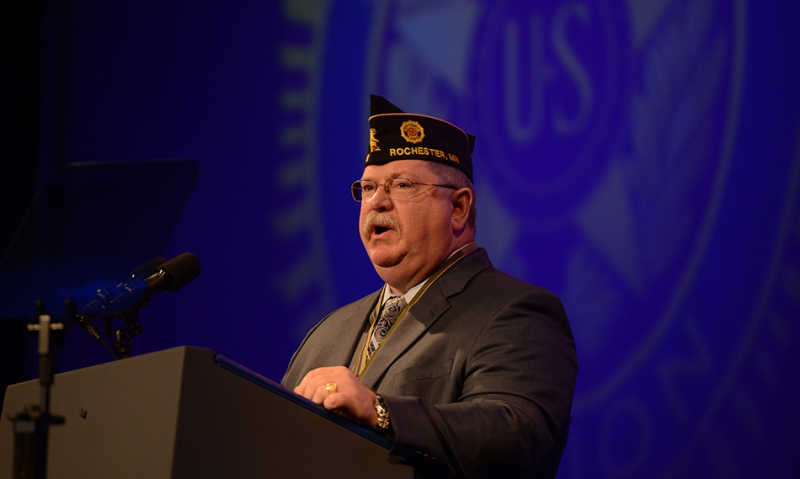 A former U.S. Air Force trauma surgeon who pioneered innovative ways to stop battlefield bleeding was presented the highest honor that The American Legion can bestow, the Distinguished Service Medal, at the 96th National Convention on Aug. 26.

Dr. Donald H. Jenkins, a retired colonel, is currently the director of the trauma center at the Mayo Clinic in Rochester, Minn.

As a result of his work and that of other military medical pioneers, the United States has experienced a far lower combat fatality rate than what was recorded in wars prior to 9/11. Jenkins and his colleagues began using a different transfusion formula while deployed to Oman in 2002 which reduced the mortality rate from 70 percent to 20 percent, and re-introduced the use of tourniquets on the battlefield, which for many years was discouraged.

Because of his success not only in the military but in his civilian medical career, he was elected president of the National Trauma Institute, where he is one of the nation’s top experts in traumatic injury, the leading cause of death for Americans between 1 and 44.

As a leader of military medical personnel, he provided life- and limb-saving care on the battlefield, in the back of transport aircraft, at military and VA medical centers and facilities around the world. He performed emergency surgeries while serving in Iraq during the Battle of Fallujah in 2004, and retired four years later.

Thanks to the innovation and commitment of Jenkins and his fellow practitioners, mortality rates among U.S. combat casualties were reduced to 8.8 percent, compared to 16.5 percent during the Vietnam War and 22.8 percent during World War II, according to a 2010 nationwide medical conference report.

Jenkins was presented the medal by National Commander Daniel M. Dellinger on behalf of the 2.4 million members of The American Legion.