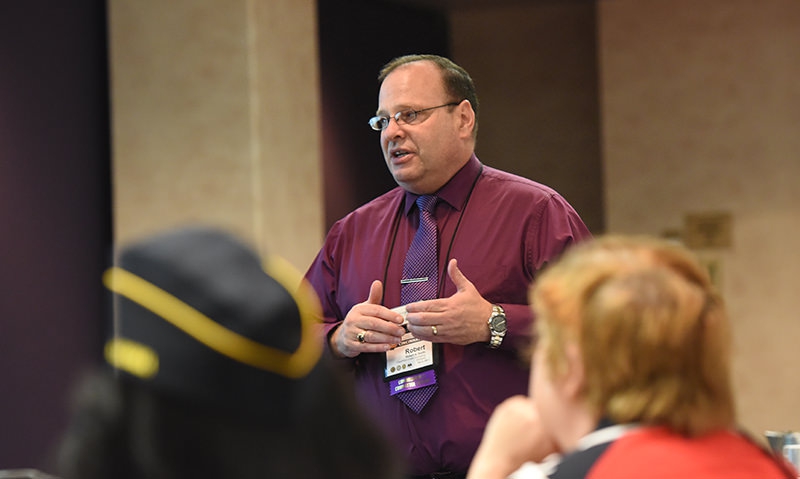 Robert A. Smith with ClearPoint Credit Counseling speaks at the Women's Empowerment Workshop held during the 98th National Convention in Cincinnati on Aug. 30. Photo by Lucas Carter/The American Legion

Financial education specialist Robert A. Smith with ClearPoint Financial Solutions shared his expertise in financial literacy in an effort to empower veterans to properly manage their finances and spending habits. “The critical part of having money is learning how to control and understand it,” he said.

The tools Smith shared are critical for servicemembers who retire or transition out of the military – primarily because they might not understand the civilian pay structure and how their new benefits and entitlements may appear on their pay statements.

“When you go into the military they teach you to exercise like the military, eat in a military way, sleep military, your friends are all in the military and you live in military housing,” said Legionnaire Rose Hodgeboom. “After you are in for x amount of years, they tell you to start thinking like a civilian. It is a totally different culture shock.”

The experience was eye-opening for Hodgeboom, a Vietnam-era veteran who said she came to the event to find ways to prioritize her spending and adjust patterns that could potentially allow her to save more of her income.

The American Legion introduced the workshop at its convention after receiving feedback from its women veterans survey. “One of the survey questions asks women veterans what they would like to see in their communities. Out of the more than 3,000 responses we received thus far, there was an overwhelming need for access to information on financial literacy,” said Rhonda Powell, director of the Legion's National Security Division, who also leads the Women’s Outreach Program.

All information from the survey is kept private and submitted anonymously. Women veterans can access the survey here until Sept. 18.