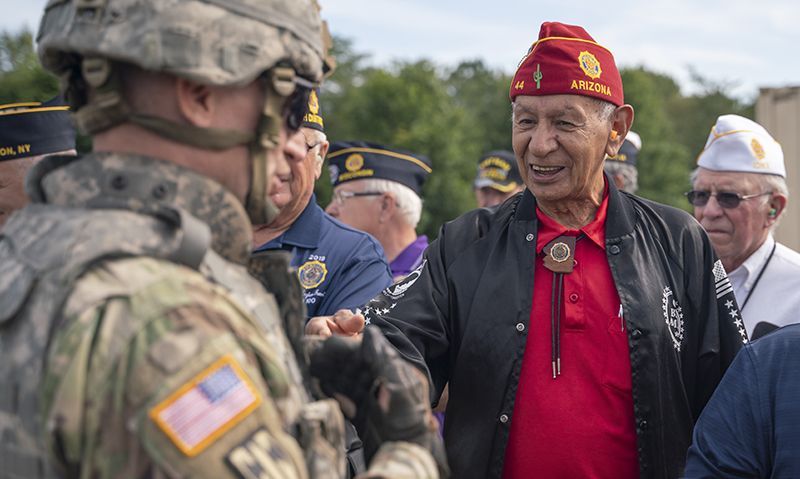 Artillery fire, cyberwarfare operations, Indiana’s only subway station, a town submerged in water and Sahara the camel are a few experiences members of The American Legion’s National Security Commission encountered Aug. 23 on an offsite trip during the 101st National Convention in Indianapolis.

The first stop was to Camp Atterbury, a military training facility about 45 miles south of Indianapolis that sits on 35,000 acres with 7,000 beds. It was once a major combat training facility during World War II, as well as a prisoner-of-war camp for Italian and German soldiers captured during the war, and a training facility that supported Indiana National Guard missions during the Vietnam War, Operation Desert Shield and Desert Storm. However, following the attacks on 9/11, Camp Atterbury “found new life as a premier training mobilization site,” said Lt. Col. Chuck Wimp, incoming commander for Muscatatuck Urban Training Center – the second stop of the trip. Camp Atterbury serves as a mobilization and demobilization facility that ensures National Guard and reserve servicemembers, and even civilians, are well trained and prepared for what to expect when deployed in theater.

Col. Felicia Brokaw, post commander of Camp Atterbury, said the facility at one point was oftentimes referred as “Sleepy Hollow” because community members didn’t know where it was located exactly, just that “we made a lot of noise, but they didn’t know what we did.” Now Camp Atterbury opens it gates a few times a year for the community to see what it is that they do.

Camp Atterbury has an urban assault course, small arms range, 25 forward operating bases (about 75 acres each) that replicate warfare how it is overseas, cultural immersion through role play with Afghan and Iraq citizens, an artillery range, rail deployment that can house a 120-car load capacity and more to push forces out quickly, and other resources to prepare for deployment around the globe. While driving through the facility’s grounds, Legionnaires were handed ear plugs before making a stop outside the artillery range in preparation to step outside and watch live rounds of artillery fire.

Ohio National Guardsmen were on the range for their annual two-week training.

“This is where anyone in a field artillery battery loves to be: whether at the battalion level, you want to come out and see the gun shoot, or at the battery level where you want to get to the field and shoot the gun,” said Capt. Robert McClurg, battery commander with the Ohio National Guard out of Columbus. “There’s a lot of monotonous stuff that we take care to make sure that our guys can get out here and be successful … and this is what we train for.”

After the Legionnaires had lunch on base in the cafeteria, they travelled over an hour further south through rural Indiana to Muscatatuck Urban Training Center (MUTC) – a 1,000-acre compound that provides real-world capabilities for training and testing of events prior to actual deployment.

From 1919 until 2001, Muscatatuck served as a facility for the mentally and physically disabled. When the Indiana National Guard took it over in 2005, leasing it from the state of Indiana, it was transformed to provide a “real as it gets” experience for deployed personnel, as well as first responders, police officers, disaster-relief personnel and others.

When the bus drove into the gated town of Muscatatuck, they were greeted with a flooded community that first responders like to use, a functional embassy, collapsed buildings, burned vehicles, a jail, hospital, water treatment plant for cyber usage, trailer park, train-derailment, Afghan farm village, one mile of underground tunnels, shantytown’s, bus station, Middle Eastern market, underground subway, a camel and more areas that help provide real-life scenarios.

National Security Commission member Doug Feltman of South Dakota said, "It is just amazing; I had no idea there was a facility like this. It is quite a facility."

Wimp said MUTC provides an opportunity to train in land, air, sea, cyber and limited-space domain. It’s preparing “for not just the wars that are going on now, but possibility of conflicts of the future.”

The facility now houses a cyberrange operations center for training and testing, which Legionnaires visited. Keith Paris, the Environment Platform Cyber Exercise Planner, shared that instead of looking at home or office computer hackers, they are looking at industrial controls such as devices in a water treatment plant that a cyberattack might turn off the valve or turn on the valve. “We are trying to concentrate on how to protect them,” he said. “So we test your ability to protect them or if necessary, to attack them.”

Besides the cyberrange center, Legionnaires visited the subway, which features subway cars from Chicago that are no longer able to be in use. Wimp said having the subway “creates a much more complex environment” to allow responders to train for a terrorist attack, for example. They can close off the subway with rubble and put mannequins, cadavers and role players yelling for help. The other stop at Muscatatuck visited by Legionnaires was home to Sahara the camel, where lots of photos with and petting of Sahara occurred. Wimp said having the camel allows bomb dogs or dogs that sniff out drugs to train around the camel to understand its scent. “If you take (the dogs) into an environment where they’ve never seen a camel before, it’s a bad day for everybody,” Wimp said.

As Legionnaires boarded the bus to head back to Indianapolis, Wimp shared a few final words. “Thank you all for your service. I greatly appreciate everything you do for our nation and for our homeland … both for our war fighters and our first responders.”