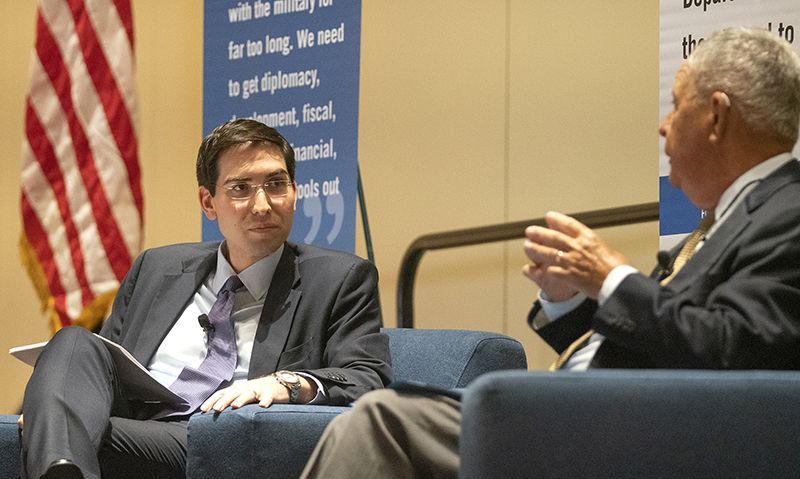 The primary focus of the U.S. Global Leadership Coalition (USGLC) is “to raise awareness about and educate the public and law makers about the value of America’s development and diplomacy alongside defense, and the value it has for our economy, that it’s essential to our national security,” said Marine veteran and Legionnaire Sean Sorbie, director of Veterans Outreach for the U.S. Global Leadership Coalition, to members of The American Legion’s National Security Commission Aug. 24 during the 101st National Convention in Indianapolis.

According to USGLC’s website, it’s overall mission is to:

- elevate America’s civilian tools alongside a strong defense to prevent conflict and keep our nation safe;

- educate and engage the American public and opinion leaders about the importance of America’s civilian tools of development and diplomacy; and

- educate community leaders and members of Congress on the positive impact that U.S. international affairs programs have on a local, state and nationwide level.

“We understand that the threats today around the globe cannot be solved through military power alone. Whether it be transnational terrorists organizations, instability that’s led by famine, environmental challenges, disasters, global super competition, all of it,” Sorbie said. “We need to be trying to prevent conflict as best we can so we don’t have to send our brothers and sisters into harm’s way if it can be prevented.”

The USGLC brought in retired U.S. Marine Corps. Lt. Gen. Dennis McCarthy to answer questions from Legion delegates on national security, as well as how The American Legion can be a voice in the nation’s capital for the organization.

Development, diplomacy and defense “ are inherently connected,” McCarthy said to the Legionnaires. With that, commission member Marty Greeley from Massachusetts inquired about China’s interest in expanding, specifically into Taiwan.

“The people in this room are the kinds of people who know firsthand the value of diplomacy because you know the cost of war. The last thing I want for my sons who are in uniform today is to go to war with China, unless it’s an absolute necessity,” McCarthy said. “China is an issue that we’re going to have to deal with for many, many years. And we need to deal with it in a smart way. In the end it’s understanding the world perhaps better than we do right now. And understanding the importance of resources like water around the country. We have a good fix on oil but what do we understand about the importance of water and where it’s more critical.”

Brent Webb of Post 973 in Chicago asked what role veterans can have to help tackle these national security issues that we are currently facing, and may face in the future.

“Like I said before, there’s nobody that understands the cost of war like veterans. The more we can do as veterans to communicate that and to help people understand that the cost of development is a lot less than the cost of combat … I think that is a vital message,” McCarthy said. “If the Legion can get behind and express some of these ideas in a resolution, in their policies, that’s going to have the effect to communicate to the American people.”

USGLC National Engagement Director Derek Gianino, who sat next to McCarthy during the question-and-answer discussion, asked what message should be conveyed to Congress about the importance of connection between development, diplomacy and defense.

“The American Legion started the process for the post-World War II GI Bill. You were a catalyst, a real leader in that tremendous piece of policy. And it did great things for the troops who fought in World War II, and it did great things for the country because of the contributions those troops made after the war,” McCarthy said, which caused an eruption of applause from the Legion delegates. “Everybody in The American Legion today ought to be celebrating that and saying our history is really strong in that era. If you send a message to the Congress today that The American Legion is still taking care of the troops, then let’s also make sure that we’re doing the right thing for diplomacy and development so that they can make one of the greatest sacrifices by our troops less likely. And if those sacrifices are necessary, it makes us more successful.”