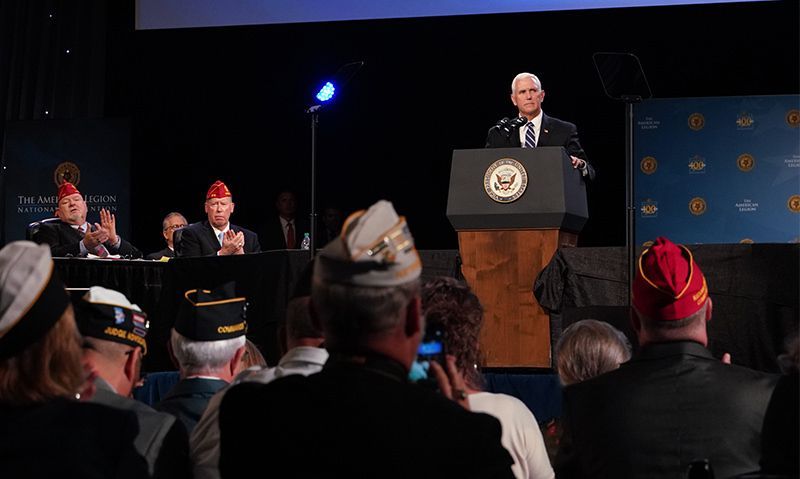 Vice President Mike Pence lavished praise on The American Legion during his speech to delegates Aug. 28 during the organization’s 101st National Convention in Indianapolis.

“The American Legion is making a difference for our veterans.”

It was a bit of a homecoming for Pence, who was governor of Indiana before becoming vice president. “I'm awfully proud to stand with all of you,” he said, blocks from the Indiana Statehouse. “The American Legion is the largest and most influential veterans organization in America, and it's headquartered right here in Indiana.”

Pence vowed the White House would continue to support the nation’s veterans, including the delivery of their benefits.

He noted the change in holding VA accountable for the treatment it provides veterans. A few years ago, several high-profile issues called into question how some VA medical centers were run.

“Scandal after scandal at the VA revealed a cold indifference to the fate of our veterans,” the vice president said. “But those days are over.”

He specifically mentioned the VA Mission Act, calling it the “most sweeping VA reform law in half a century.”

More than 7,000 VA employees have been fired for negligence, Pence said. “The era of abuse at the VA is over. We're not going to put up with it anymore.”

During his address, Pence praised the Legion for its support of children and youth activities.

Pence also hit on a number of other topics important to veterans:

thanks to the courage of our armed forces and the leadership of our commander in chief, earlier this year the last inch of territory controlled by ISIS was captured. Extraordinary accomplishment for our troops.”

• Korea: Pence said that the U.S. is no longer threatened by North Korea. “Three historic meetings have taken place. North Korea's leader also promised to return the remains of all fallen U.S. servicemembers in the Korean War.”

• Repatriations: More than two dozen Korean War veterans have been identified and returned home. “We will not rest until we bring all our boys home from the Korean War.”

• National defense: Pence said the Army will soon have nearly 300 new M1 Abrams tanks, the Navy will deploy an advanced class of aircraft carriers and the Air Force will receive hundreds of new Joint Strike Fighters, the F-35. “And tomorrow (Aug. 29), the president will install four-star General John Raymond as the first commander of U.S. Space Command. And very soon, we will stand up the sixth branch of our armed forces, the United States Space Command.”

In closing, Pence thanked Legionnaires for their service.