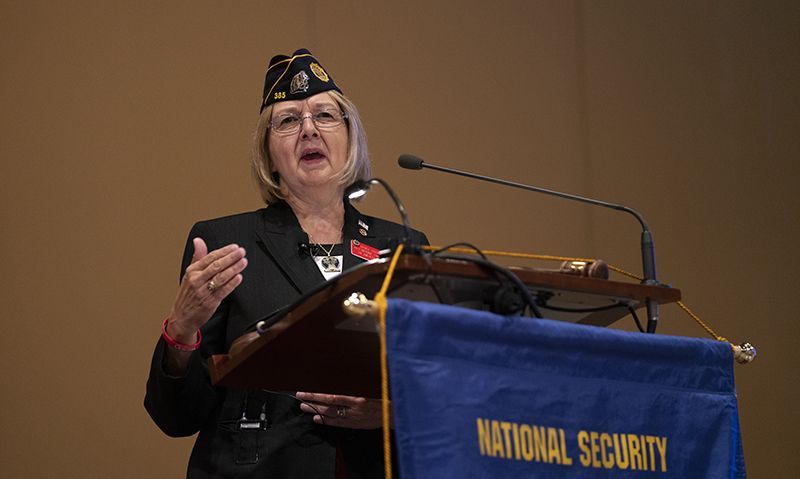 “The calls to expand the draft to include women have been going on for years, and particularly since the Pentagon opened up combat roles to females in 2015,” Rohan said to members of The American Legion’s National Security Commission meeting Saturday, Aug. 28, during the 102nd national convention in Phoenix.

In the National Defense Authorization Act for Fiscal Year 2017, Congress charged the National Commission on Military, National, and Public Service two tasks: (1.) “conduct a review of the military selective service process; and (2.) “consider methods to increase participation in military, national, and public service to address national security and other public service needs of the nation.”

After two years of research, the report, “Inspired to Serve,” was released in March 2020.

Rohan shared with the National Security Commission a few highlights.

The report released states that “The Commission has defined service as a personal commitment of time, energy, and talent to a mission that contributes to the public good by protecting the Nation and its citizens, strengthening communities, or promoting the general social welfare.”

The report continues, “In the Commission's vision, every individual will be exposed to service opportunities throughout their lifetime, beginning with young people experiencing robust civic education and service learning during elementary, middle, and high school.” Rohan said that the Commission challenges the nation to cultivate this service by 2031, “which is the 70th anniversary of President Kennedy calling for Americans to serve our nation. This government Commission envisions that 5 million Americans will begin participating in this military, national or public service every year,” she said.

The report continues, “In addition, by 2031 more than enough qualified individuals will seek to serve in the Armed Forces, minimizing the need for traditional military recruiting …”

The report addressed the question of whether to expand the Selective Service registration to women, declaring that “the Commission seriously considered a wide range of deeply felt moral, legal, and practical arguments and explored the available empirical evidence. The Commission concluded that the time is right to extend Selective Service System registration to include men and women, between the ages of 18 and 26. This is a necessary and fair step, making it possible to draw on the talent of a unified Nation in a time of national emergency.”

Through resolution, The American Legion supports legislation that amends the Selective Service registration program to “include mandatory registration for females between the ages of 18-25.”

“I am so proud that your commission, and The American Legion, had the foresight to have this resolution on file if it’s ever needed,” Rohan said. “And my guess is, it may be needed pretty soon.”

Rohan added that consideration on this issue will be brought back up to Congress soon.

In the meantime, to help 18-year-olds to understand the need to register for the Selective Service System, Rohan called up members of the National Security Commission for their assistance.

Anytime American Legion Family members have an opportunity to speak with youth, whether its during Boys State, Oratorical Contest or American Legion Baseball, “remind them about the draft, that they need to register. They can do it simply by going to sss.gov. Then ask them to be a center of influence to other kids in their high school, that they need to make sure that they register.” Because as the Selective Service System website states, if not registered, they “won’t qualify for federal student loans or grant programs.”

Another way to register Rohan shared is through the license branch thanks to legislation passed – in 41 states there’s a box on the driver’s license application for men 18-26 to check that will be transferred over to the Selective Service.

“George Washington is quoted as saying, ‘The willingness with which our young people are likely to serve in any war, no matter how justified, shall be directly proportional to how they perceive the Veterans of earlier wars were treated and appreciated by their nation.’ If our families feel like they have been taken care of during their loved one’s deployment, the chance of that servicemember re-enlisting will be greater. Then the chance of their family members and friends stepping up to put on the uniform will increase as well. This will help the nation maintain a high retention rate, and a high number of volunteers stepping up in the armed forces and hopefully that will mean we will never need to implement the draft.”

Rohan said that over the next several months, even years, Americans will see what becomes of the National Commission on Military, National, and Public Service report and its idea of “implementing a plan based on President Kennedy’s words, ‘Ask not what your country can do for you. Ask what you can do for your country.’”