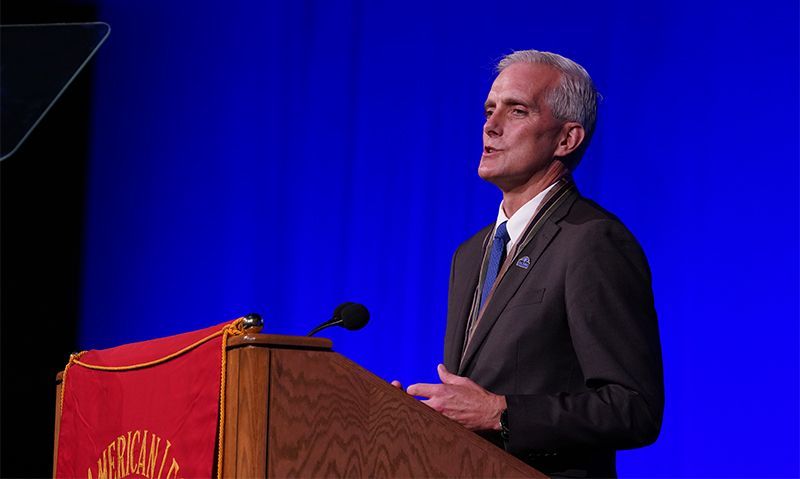 Addressing The American Legion’s 102nd National Convention just ahead of the 20th anniversary of the Sept. 11, 2001, terror attacks, Department of Veterans Affairs (VA) Secretary Denis McDonough praised those who served during the global war on terror.

“So many young Americans made the choice that so many veterans make at one point or another,” said McDonough. “They made a choice to serve our country, to protect and defend our freedom, to fight for alongside a fellow servicemember.”

Twenty years of war in Afghanistan came to a formal end less than a day before. McDonough addressed the array of emotions that veterans, their families and caregivers are experiencing as they watch Afghanistan once again fall under Taliban control.

“I know that what's happening in Afghanistan over this past month has been incredibly painful,” he said. “In combat zones I have seen your excellence in the grueling demands of deployment after deployment. At Walter Reed, I’ve been moved by the strength and resilience of our wounded warriors. And at Dover (Air Force Base in Delaware), I’ve witnessed the unimaginable grief of military families as they say their goodbyes.

While much of the country is bound by the limitations of their experiences when it comes to understanding what it is like to serve in Afghanistan or have a loved one who did, there are many who do understand, said McDonough.

“There are thousands of veterans at VA who do understand and millions of people across the country who know what you did and who know what servicemembers have done for them,” he said.

In the final days of the war in Afghanistan, American servicemembers ran toward the fight once more, saving thousands of lives, said McDonough. This time it was to aid the evacuation of Americans, Afghan allies and their families to safety as the security surrounding the Hamid Karzai International Airport in Kabul rapidly deteriorated. At least 13 U.S. servicemembers were killed in a suicide bombing while helping people flee the Taliban.

“While I cannot imagine what you are going through, I want you to know this — we at VA are here for you. Your American Legion brothers and sisters are here for you. And the nation will always be grateful for what you did and sacrificed for us.”

It’s a promise that goes back for generations of American veterans.

“This difficult moment also reminds us of the sacred duty mission that we at VA and the Legion share together,” McDonough said. “It all comes back to the fundamental promise that our nation made to the veterans of the wars in Afghanistan and Iraq and anyone who signed up for military service.

VA has a dedicated help line for those as risk of suicide. If you are having thoughts of suicide, call 1-800-273-8255, then PRESS 1 or visit http://www.veteranscrisisline.net/. For emergency mental health care, you can also go directly to your local VA medical center 24/7 regardless of your discharge status or enrollment in other VA health care.