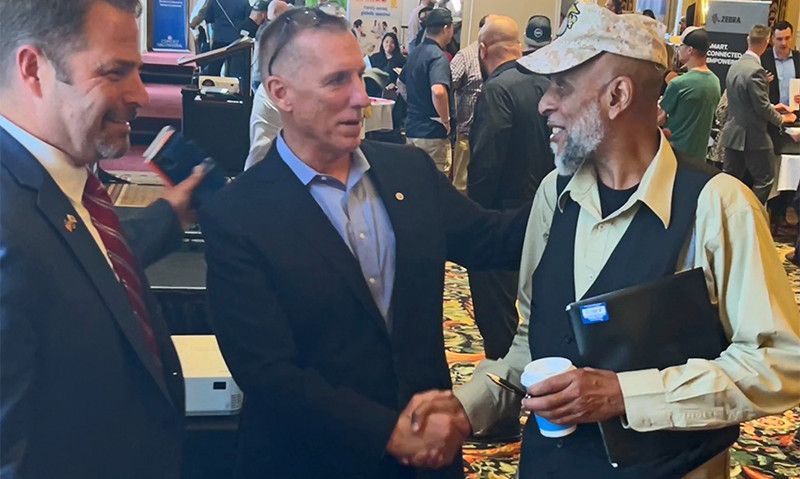 Adam Rocke of the U.S. Chamber of Commerce, left, and the Department of Labor’s Mark Toal, center, talk with Hiring Our Heroes Career Fair jobseeker Reginald Jones Aug. 25 at the event put on by The American Legion Veterans Employment & Education Commission. Photo by Jeff Stoffer

Adam Rocke and Mark Toal have worked hundreds of career fairs. And yet, their passion for connecting military personnel, veterans and their spouses with employers that are not only “veteran-friendly” but “veteran-ready” shows no sign of fatigue, despite the twists in the hiring economy. They always keep in mind why they are doing this, and for whom.

“When I look around, after 34 years in the Army, I realize that these are the folks who served to the left and right of me in combat,” says Rocke, a senior director for the U.S. Chamber of Commerce’s Hiring Our Heroes program, which conducted a job fair Thursday in Milwaukee as part of the 103rd American Legion National Convention. “They raised their right hand and said, ‘Hey, send me.’ They deserve these opportunities. That’s where the passion comes.”

Thursday’s event, which followed workshops on financial literacy and resume writing, attracted about 100 jobseekers, and was sponsored by the American Legion’s Veterans Employment & Education Commission. Forty-four employers ranging from Amazon to the Department of Veterans Affairs, T-Mobile to Haribo Gold Bears and a variety of others across a spectrum of industries met candidates, collected resumes and made connections that will lead to jobs for many.

Toal, strategic outreach director in the U.S. Department of Labor’s Veterans Employment and Training Service, says many of the same companies return over and over to Hiring Our Heroes fairs because they understand the art and science of converting a military occupational specialty into a rewarding civilian career. “I believe employers are here because they recognize that hiring a veteran is not only the right thing to do, it’s a good business decision,” says Toal, who spent 28 years in the Marine Corps. “They recognize the talent a veteran will bring to their organization. That’s why they are here.”

“They wouldn’t be here if they were not a veteran-friendly, veteran-ready company,” adds Rocke, a Paid Up for Life Member of American Legion Post 176 in Springfield, Va. “They came with opportunities. There are thousands of opportunities in this room, and there are about 100 job seekers here.” He encouraged participants to visit every employer because the right fit may not be the first one assumed. “There are no wrong doors here.”

Rocke and Toal say employers who regularly participate in Hiring Our Heroes events typically put the candidate first, regardless if it’s for a job with their particular company or another. “The employers that we bring are like-minded employers that have the same values that we had in the military,” Rocke says. “Most of these folks who are hiring are veterans themselves and understand what the transition is like and want to help. They are not here for pity, though. They are here to give you a job because you earned the job.”

But, he explained, “if there’s not a fit for one of these companies, they know the other companies that come here, and they are not afraid to walk you across the floor to the other company to make that introduction. What they want is what’s best for the servicemember, the veteran and the military spouse. Yes, at the end of the day, they do want to hire talent. But the most important thing to them is the mission of putting the veteran talent to work in the right place for a meaningful career.”

That is what active-duty Marine Corps officer Ivan Lawing was hoping he would get from the career fair. Imminent retirement from the Marines means a whole new world awaits, one in which the former communications officer will have to translate his military training and experience into the civilian marketplace. “That’s the challenge,” he said of the shift. “It’s overwhelming.”

American Legion/Hiring Our Heroes career fairs aim to put jobhunters at ease because the interactions are usually veteran-to-veteran.  “The talent pool – the level of talent that they are able to find from military veterans – is why they keep coming back,” Lawing says of the employers he met. “As a jobseeker, it’s easier to talk to them because they seem to be more experienced with the communications, the dialog, the narrative on both sides. And that creates a bridge to the civilian job market and the military that otherwise wouldn’t be there.”

At a time of relatively low unemployment nationwide – and high hiring demand in multiple career paths – the key objective for military-affiliated candidates is making the right decision. “There is a war on talent,” Rocke says. “There are more jobs than there are people to fill those jobs …  probably 2.5 open positions for everybody looking for a job, so there is no reason someone shouldn’t find a job if they have the right skills, education, credentialing and skill sets for that job.”

One career field clearly represented was veterans support. The Department of Veterans Affairs, which has long faced a serious shortage of nurses, is also now expected to need to hire more employees to process and adjudicate disability claims applications since the PACT Act was signed in August, expanding toxic-exposure care and benefits to more than 3.5 million additional veterans.

Coast Guard veteran Alicia Prindle staffed a table for the Veterans Health Administration. A VA employee for the last three years, she says she loves her job as a veteran helping others who served. “It is very fulfilling because I get to work toward that mission every day, to support our veterans.”

American Legion Department of Wisconsin Deputy Veterans Service Officer Matt Seidl, an Army veteran of the fighting in Iraq between 2004 and 2008, says he had planned to make a career in the service. “I thought I was going to be a lifer,” he says. “I got blown up nine times, got injured, got out … and didn’t know what the heck to do. I stumbled into this field and love helping fellow veterans get the benefits that they deserve. If you can’t be it, you can at least help the ones you did serve with. That means a lot to me.”

Skilled trades and apprenticeships were also well-represented at the career fair, an area of high opportunity in the current economy. “I really believe that apprenticeship is a proven way to get good-paying careers … family-sustaining jobs,” Toal says. “Right now, for an apprenticeship graduate, the average salary is $77,000.”

The “earn-while-you-learn model,” he adds, “leads into good-paying jobs and careers … whether it’s an I.T. credential, whether it’s as a mechanic, whether it’s a commercial driver’s license, or whether it’s an iron worker in the traditional blue-collar, white-collar or in the new-collar trades in the I.T. world.”

Fifty-nine-year-old Marine veteran Reginald Jones of Milwaukee had two goals in coming to the event. “One, for the camaraderie and two, I need to make some career changes. I’ve had a few injuries, resulting from a fall on the ice last winter. Things are changing.”

A longtime longshoreman with the Port of Milwaukee, he is looking for a job not so seasonal and less physically demanding. “I really enjoy logistics – getting material from here to there,” he explains. “The Marine Corps gave me exceptional training to do what I am doing now.”

As for the Marine officer soon to retire: “I’m just trying to get my name out there and see if anybody will give me a chance.”

The American Legion, U.S. Chamber of Commerce and the Department of Labor are doing all they can to find “veteran-ready” employers who can help candidates not only find jobs, but the right jobs for them, whether it’s in business management, health care, logistics, or gummy Gold Bears.

“We all appreciate what the Education and Employment Commission does and what the nation’s largest veterans service organization does for our veterans and their families,” Toal says. “And I know that the American people certainly recognize and appreciate it.”