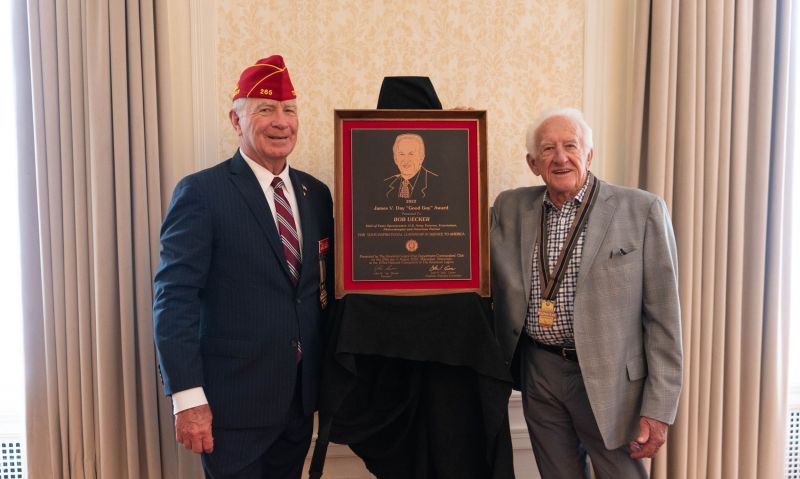 “Bob is a beloved figure not just for his legendary wit and comedic skills, but he is a Legionnaire who has given back to his country and community,” American Legion National Commander Paul E. Dillard said. “From Make-a-Wish to supporting the fight against cancer, Bob Uecker has given money and time to worthy causes. Before he ever played in the major leagues, he was an American Legion Baseball player and an American soldier. He entertained millions on the sitcom Mr. Belvedere and has been the voice of the Milwaukee Brewers for 51 years. He is an outstanding selection for this award.”

“When I see some of my friends who have received this award like George Foreman, Johnny Bench and Lou Holtz, I knew that this was quite an honor,” Uecker said. “When I was a kid, Legion ball was the thing to do. Plus, I really like the military aspect of what the Legion does.”

Uecker, an Army veteran and honorary life member of American Legion Post 537 in Wisconsin, reflected on his early ball playing days as a pitcher, before he became a back-up catcher in the big leagues. “My manager was about to pull me and I said I think I can get his guy out. I struck him out earlier. But the manager said, ‘I know, but it’s the same inning.’”

Uecker made his major league debut as a catcher with the Milwaukee Braves in 1962, and later played for the St. Louis Cardinals, Philadelphia Phillies, and Atlanta Braves.  As a celebrity spokesperson in Miller Lite commercials, Uecker would regularly tell ballpark ushers, “I must be in the front row,” before winding up in the nose-bleed seats.

After presenting the award to Uecker at a PDCC luncheon, Chairman and Past National Commander John P. “Jake” Comer announced that the group was donating $2,000 to Wisconsin Make-a-Wish on behalf of Uecker.