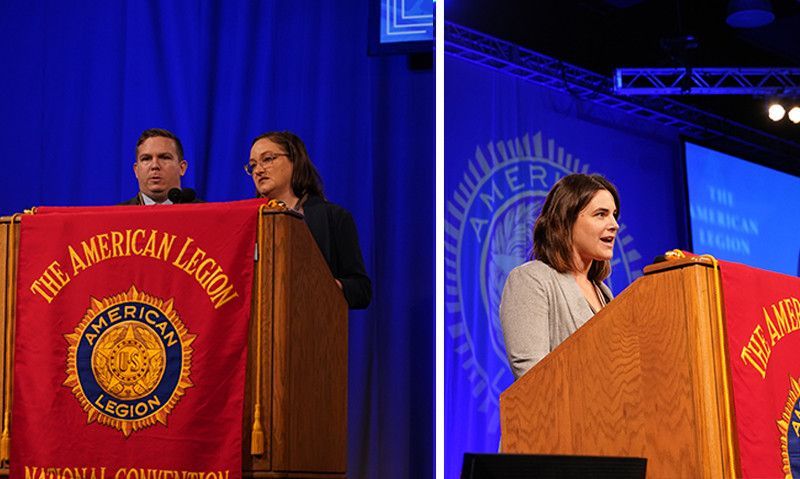 A Hawaii television station, the Associated Press and a Milwaukee newspaper each are recipients of The American Legion’s Fourth Estate Award for outstanding achievement in journalism that has made a positive impact on a community.

In the Internet Category, the award was presented a collaborative Associated Press effort from reporters Kristin M. Hall, James LaPorta and Justin Pritchard. The trio investigated firearms and explosives that have gone missing from military inventories since 2010. The series, “AWOL Weapons”, led to congressional reforms and a new accountability system by the U.S. Army. Gen. Mark Milley, Chairman of the Joint Chiefs of Staff, called the investigation “another example of free press shining a light on the important subjects we need to get right.”

“I used to have this quote that I’d keep at the bottom of my email,” said LaPorta, a U.S. Marine Corps combat veteran. “The quote was, ‘Journalism is just as vital to the survival of democracy as the army that guards its borders.’ Journalism gives a voice to the voiceless. It exposes injustices and holds leaders accountable. That’s what good journalism does.”

In the Print Category, the Milwaukee Journal Sentinel –  which in recent years has won three previous Fourth Estate Awards – was honored for its piece, “Military Suicides Take Toll on Wisconsin National Guard.” Journalists Katelyn Ferral and Natalie Brophy chronicled the cases of four Wisconsin veterans who took their own lives just months after they served in Afghanistan together. Wisconsin U.S. Sen. Tammy Baldwin pressed Guard leaders for more transparency and data on suicides.

Accepting the award, Ferral took time to “thank the families that were selfless and wonderful in sharing the stories of their sons. I and the rest of my fellow reporters can’t do journalism unless people are willing to share and talk and spend time with us. Often that can be really difficult for those families.”

In the Broadcast Category, KHON2-TV in Honolulu, Hawaii, was selected the winner for its nine-part series “The Forgotten.” In it, previous Fourth Estate Award winner Pamela Young highlighted the significant contributions made by Chinese-American and Asian-American veterans during World War II. It culminated in the awarding of Congressional Gold Medals to hundreds of World War II veterans and surviving family members at a Washington event.

Young’s flight into Milwaukee was cancelled and she was unable to attend the convention to receive the award in person.

“The American Legion Fourth Estate Award is difficult to earn,” American Legion National Commander Paul E. Dillard.  It is a testament to the demanding nature of the competition – and the quality of entries. Not only do the reports have to be informative and entertaining, they also have to provide a tangible benefit to society.”