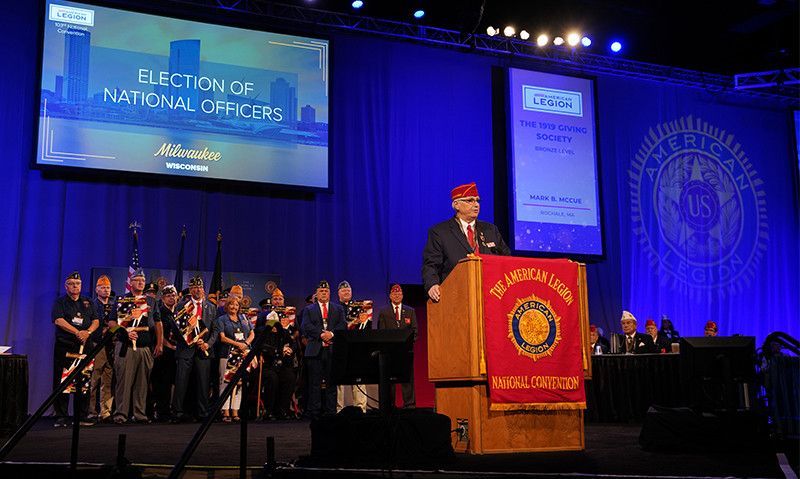 In April, The American Legion teamed with Chip Ganassi Racing to announce its ‘Be the One’ initiative, an effort aimed at stemming the tide of veteran suicides.

During the Legion’s 103rd National Convention in Milwaukee on Sept. 1, newly elected National Commander Vincent J. Troiola pledged to make the effort his biggest focus during the upcoming year.

“My platform and No. 1 priority for my year as national commander will be tackling the toughest challenge facing veterans: veteran suicide,” Troiola said. “The American Legion is asking you to ‘Be the One’. And by you, I include every one of us, military and civilian alike. We all need to ‘Be the One’ to begin thinking, talking and acting to save just one life.”

Troiola said ‘Be the One’ is a multifaceted approach to tacking veteran suicides that includes:

·       Creating safe spaces for veterans to be open about their struggles and encouraging every American, veteran and civilians alike, to take the pledge to ‘Be the One’ to help end veteran suicide.

“As the military changes, and as military issues change, so does The American Legion,” Troiola said. “While the Legion continues to celebrate its past, it does so while also marching toward an evolving future, discovering ways to stay relevant and add even greater value to the lives of younger veterans.

“One thing that hasn’t changed is the Legion’s dedication to addressing the toughest challenges facing veterans and their families. Veteran suicide may be the biggest challenge yet, but anyone can ‘Be the One’ to help save just one veteran.”

A life member of American Legion Post 1682 in Rockland County N.Y. – and a member of Sons of The American Legion Squadron 1682 – Troiola announced a goal of raising $2 million for the Legion’s Veterans & Children Foundation. He also said this year is an opportunity to see growth in the organization’s membership, crediting immediate Past National Commander Paul E. Dillard with providing the foundation for such a task.

He also announced his program to recognize American Legion posts that help with that effort. “You will see the V.E.T.S. acronym a lot this year,” Troiola said. “It stands for Veterans, Education, Teamwork and Sponsor. It’s how we build a stronger and larger American Legion.”

Posts that achieve 90% retention in this membership year will receive a special national commander’s pin with V.E.T.S. engraved on it, while posts with 95% will receive a V.E.T.S. coin.

Membership-Excellence pins with V.E.T.S. will go to posts that recruit five members from expired rosters. If post excellence is achieved, the post will also receive an autographed national commander’s license plate. All departments will receive an additional numbered V.E.T.S. coin to be given to a Legionnaire of their choice who has gone above and beyond for membership.

Troiola noted that the pandemic changed the way we go about our daily lives, and that goes for the Legion Family as well. “Many Legion posts throughout the country were forced to close their post homes or had no access to their meeting places,” he said. “Many of our Legion posts that were able adapted and found ways to support their communities who needed help to get through the issues that arose from the pandemic.

“We may have survived the coronavirus, but many of our youth programs have suffered in diminishing number for a variety of reasons. Change will be a big part of our lives, but healthy organizations adapt to the times and move forward. Through innovative strategies and greater flexibility, we can grow the numbers to pre-pandemic levels.”

Troiola urged Legionnaires to reach out to school officials and share information about the organization’s youth programs. “The best advertisement for our programs is through the students that have attended, but with the pandemic, that method of communication has diminished,” he said. “One thing is for sure: ZOOM and (Microsoft) Teams has not gone away and is being utilized all over the country. I know my school district where I work meets virtually. The PTO/PTA meetings (and) school board meetings all take place virtually. That sounds like the place to start.”

Troiola praised PNC Dillard for his advocacy in gaining passage of the Sergeant First Class Heath Robinson Honoring Our PACT Act, as well as the Legionnaires responsible for sending more than 34,000 messages of support for the legislation to their senators.

“For some members of Congress, this may have been the first time seeing the full effect and unity of our voices,” Troiola said. “But it will not be the last. We must take the spirit and message of our ‘Be the One’ campaign and pass comprehensive mental health care legislation for veterans, including establishing a national Buddy Check week. To do this requires modernizing VA facilities that are more than 50 years old on average. We must never forget that suicide continues to be a problem in the active-duty ranks as well. Every Legion post located near a military base should provide a welcoming environment to those still serving.”

Troiola also continued the Legion’s push for U.S. citizenship through military service, telling convention delegates, “we must honor immigrants who have worn the uniform of the U.S. military. They took an oath to die for this country if called upon. Those who serve honorably should receive their citizenship before leaving active duty. Veterans and spouses who have not committed serious felonies should not be deported.”

And coming off the one-year anniversary of the U.S. withdrawal from Afghanistan, Troiola called for remembering those who assisted U.S. troops during their mission there.

“We must remind Congress that America always stands by its allies for freedom,” he said. “Bipartisan support exists to codify the safety of our evacuated Afghan allies. It is imperative that we offer them immediate passage to the United States. On these issues and more, we must carry the burden of leadership as America’s largest veterans organization and most powerful voice for veterans, national security and 100-percent Americanism. I ask that you join me in this fight.”

Troiola served in the U.S. Navy and Navy Reserves from 1969 to 1974. He spent his entire professional career in the automotive service industry, retiring retirement in 2017 as director of service and parts at a New York Metro Mercedes Benz dealership. After a brief time at home, he began an entirely new career as a school bus driver for the Falmouth School District and part-time motor coach operator.

He has served in many offices and position within The American Legion, including department commander of New York, and chairman of the National Security Commission, Legislative Commission, Veterans Employment and Education Commission and the Membership and Post Activity Committee. He was elected national vice commander for 2016-2017.

“I will hit the ground running to work with you to having a productive, successful and fun-filled year,” Troiola said. “Remember: We are The American Legion, the voice of the veteran since 1919. As long as America has veterans, there will always be an American Legion.

“We are witnessing a movement in The American Legion. All of you are part of exciting times now and will ride into the future.”

Save
Tags: National Convention, Be the One