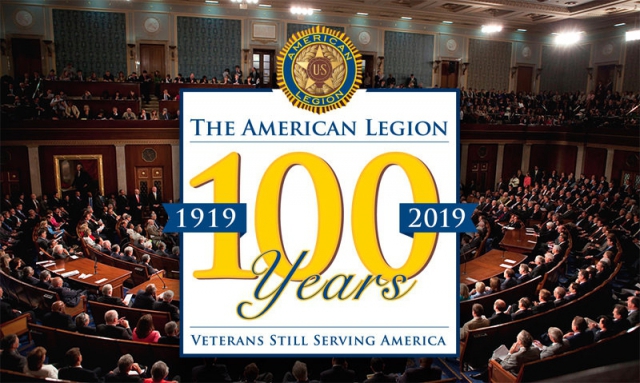 The American Legion has focused much of the past few months gathering support and co-sponsors for H.R. 2519 and S. 1182, The American Legion 100th Anniversary Commemorative Coin Act, which was introduced May 18. These bills would require the U.S. Mint to produce a centennial coin in celebration of The American Legion turning 100 and proudly representing and supporting millions of veterans.

of the American Legion Family should feel very proud of the effort to enact this legislation, to honor the 100th anniversary of the Legion’s founding.

Among the provisions is a five-month extension of the assisted living pilot program for veterans with traumatic brain injuries. This will enable VA to transition currently participating veterans into other existing programs for ongoing support and rehabilitation. The bill also extends caregiver support payments, a pilot program for newly separated women veterans to receive counseling in retreat settings, and a temporary increase in payments for travel to vet centers.

The legislation extends several other health-care related provisions, such as collection of co-payments and recovery from third parties for care provided in some instances for non-service connected care.

Authorities in both benefits and homeless veterans programs were also extended. The measure also included some technical corrections to the recently enacted Harry W. Colmery Veterans Education Assistance Act of 2017 (P.L. 115-48), where were requested by the Trump administration.

Some news outlets have been reporting that the Choice Program, through which an increasing number of veterans are receiving care in the community, could run out of money in just a few months. At his appearance before the Senate Veterans’ Affairs Committee on Sept. 27, VA Secretary David Shulkin denied those reports. He said that if Congress approves the president’s proposed budget, he expects to be able to keep Choice funded and operating.