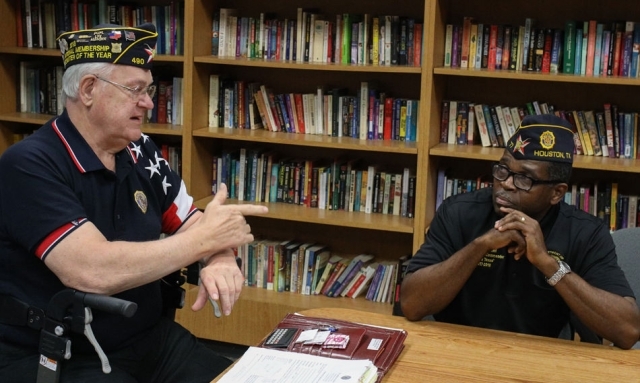 David Witucki doesn’t stop when a potential American Legion member says “not interested.” A born salesman, Witucki keeps talking and pointing out the legacy the Legion has created in its first 100 years.

“You come up with one subject, and keep changing, if he or she is not interested, just keep changing, and sooner or later they are going to look at you and say, ‘Really?’” said Witucki, the Legion’s National Recruiter of the Year of 2017-18 for recruiting 578 into The American Legion. “You have to be flexible. Just because they say they’re not interested, it doesn’t mean anything. When they say, ‘Not interested,’ I figure they don’t understand. If you keep talking, sooner or later you’re going to wear them down.”

In less than four years, Witucki has recruited about 800 members into The American Legion. On two occasion, he amassed 100 new members in a month.

Jimmy Mitchell, the commander of the 22nd District in Texas, lavishes praise on Witucki, Butch and Lynn Sparks, post recruiters, and others for the successes during the 2018 recruiting cycle. Their work helps prepare the Legion for its second century of service, Mitchell says.

“With that kind of commitment and dedication what happens is you end up with the knowledge on both sides,” he said, referring to current and new members. “We need to bring in new membership, to recruit the new veterans, and for them to realize the expectations of the Legion. They are going to have to do this one day, so they need to understand the story, and they need to understand that they are a part of the story, and that they have to contribute, and we need to give them that opportunity.”

Witucki emphasizes knowing and sharing the Legion’s history when introducing potential members to the organization, especially The American Legion’s connection with the GI Bill. After a prospective member confirms they have used it, the door opens.

“I say, ‘Well, you know who fought for that GI Bill? The government didn’t give it to you, but the Legion got it for us. And ever since the government has tried to take it away. And we’re back in there fighting again,’” explained Witucki, a member of Post 490 in Houston.

He also will point out the Legion’s work on behalf of veterans dealing with Agent Orange or coping with post-traumatic stress disorder. “I have signed up a lot of people who are sick, and didn’t know they qualified for Agent Orange, or PTSD. Or now with the Gulf Wars they’re coming down with burn pits and they’re all dying of cancer.”

Here are some other tips for recruiting members from Witucki:

Witucki also has advice for leadership to acknowledge recruiters who are succeeding.

“When you find someone that’s doing it well, build them up,” he said, noting that pins and other such rewards are great motivators.

Witucki’s affiliation with the Legion goes back to his childhood when he saw his father help out routinely at his Legion post. Now, Witucki isn’t slowing down, even though he uses a walker after back surgery.

“The Legion is in my heart,” he said. “I might be hurting. I might be on pain pills. I might be in a walker. But I still got to keep on going. That’s my part in the Legion.”