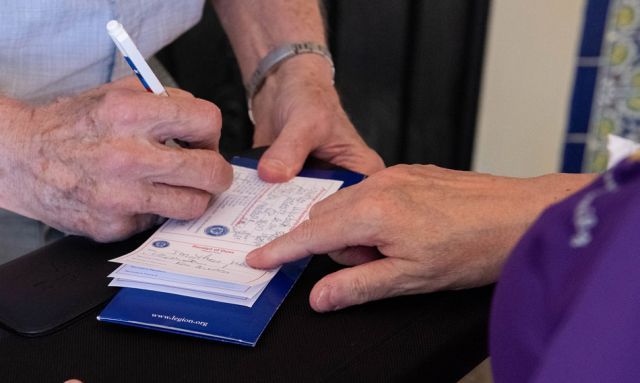 The 100 percent American Legion membership target date is around the corner – May 13. As post membership drives are ramping up to meet the target date, don’t forget about the more than 4 million veterans who are now eligible to join The American Legion under the LEGION Act (Let Everyone Get Involved In Opportunities for National Service Act).

This legislation declares that the United States has been in a state of war since Dec. 7, 1941. As a result, this acknowledges and honors the service and sacrifice of at least 1,600 veterans who died or were wounded in previously undeclared periods of war. And it also allows veterans from those previously undeclared war eras (Cold War and conflicts in between) to receive American Legion membership and benefits that they have earned through their honorable service.

The LEGION Act was signed into law less than seven months ago on July 30, 2019. And as of Feb. 4, nearly 9,200 veterans, who were previously ineligible, have joined under it. While many American Legion posts in communities nationwide are sharing the news through local media about the expansion of membership eligibility, it’s important to continue to get the word out and keep the LEGION Act at the forefront of all membership activities.

The why
While recruiting a veteran now eligible under the LEGION Act, you may have heard the words “I couldn’t join previously. So why now?” American Legion Membership & Post Activities Committee Chairman Jay Bowen provides insight on the why.

“It is extremely important that we spread the word throughout our community that The American Legion, working tirelessly for the past several years, was successful in helping our Congress understand what we’ve always known – veterans who served our great nation since World War II have been exposed to and engaged in hostile conflicts all over the world. They should be recognized as wartime-era veterans. With the passage of the LEGION Act, they have the recognition that they have long deserved.

“The passage of this act has opened membership eligibility to veterans who have earned the right to be called Legionnaires! It is now up to us to welcome those veterans into our organization.”

Who can now join?
Anyone who served honorably since Dec. 7, 1941. And remember, the LEGION Act not only expands membership eligibility for the Legion, but also for the Sons of The American Legion. So any son or grandson of an eligible Legionnaire, whether living or deceased, can join the Sons program.

While the LEGION Act will help increase membership, Bowen shared two other ways to boost numbers – working the programs and working together.
“Regardless of size, locality or assets, every post can do something in support of our programs,” he said.

That can be sponsoring an American Legion Baseball team or Boys Scout troop; sending young men and women to Boys State and Girls State or the Oratorical Contest; marching in a Veterans Day parade; or sitting with a veteran at a nursing home or VA medical center.

And Bowen reminds members when they are out in the community supporting veterans to wear the Legion emblem. “Others will see it and want to know about us, and often they will want to help.”

“This opens the door to many with friends, relatives and neighbors who qualify for membership and have similar interest,” Bowen said. “The most successful posts I have seen are posts with active programs and members working together.

“We need to reassure our veterans and their family that we were there then, we are there now, and we will be there always.”