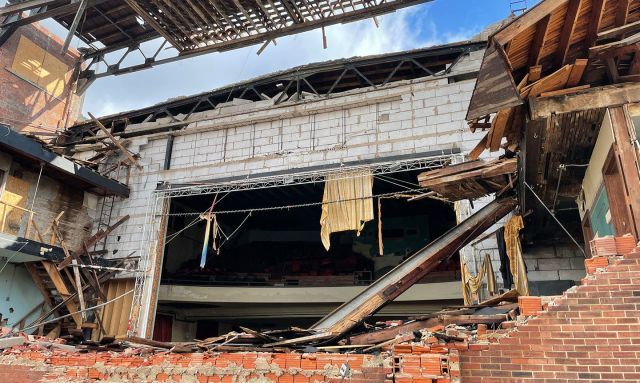 The tornadoes and severe storms that moved across several central states in early December resulted in loss of life and devastating destruction in communities. A few of the states most impacted include Arkansas, Illinois, Kentucky, Missouri and Tennessee.

American Legion Post 26 in Mayfield, Ky., stood in the direct path of the tornado. The downtown Mayfield building dates back to 1923, the same year Post 26 received its charter and moved in. Now the building is damaged, beyond repair.

“A building is a building,” Post 26 Commander Wendell Gugu said. “The home is the family you have in it. The chairs, the tables, all that stuff can be replaced. But this kind of stuff (the original charter) can’t be replaced.”

In the immediate aftermath, American Legion posts across the country responded with aid that poured into Mayfield. “The support has been great,” Gugu said.

Geoff Lee, a post-9/11 Army veteran, drove an 18-foot trailer loaded with relief supplies 950 miles roundtrip from their post near the Illinois-Wisconsin border to Mayfield.

“We wanted to help brothers and sisters in need, and Americans in general,” said Lee, who presented the checks and items. “If someone says they need help, we are ready to answer the call. That is what The American Legion is all about — veterans, families and communities.”

The delivery included clothes, water, tools and 1,000 handmade fleece blankets. The Sons of The American Legion squadron sent along several boxes of American Legion shirts, socks and other clothes for Post 26 to distribute to those in need. “I’ve got Legion members who could use this right now. This is amazing,” Gugu said. “It is really meaningful.”

Donations from American Legion Family members continue to come in to support tornado victims. Legion Family members of Post 351 in Elberfeld, Ind., collected and transported food, clothes, clean-up gear and more to Kentucky to support tornado relief efforts; Post 82 in Campbellsville, Ky., donated $1,250 to the Department of Kentucky’s relief fund aimed at helping those impacted by the tornado; and other relief donations came from Texas, Rhode Island and Alabama.

Apply for an NEF grant at www.legion.org/emergency.