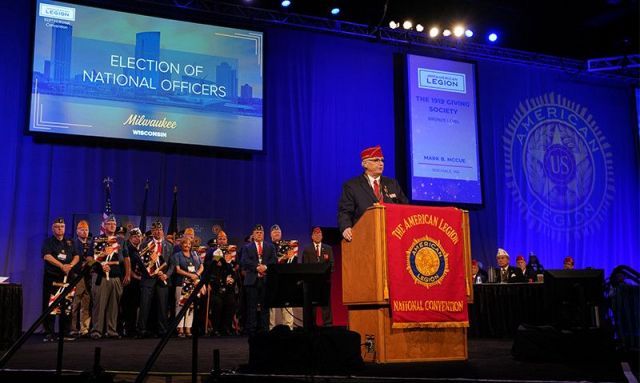 Vincent J. “Jim” Troiola was elected the 2022-23 national commander of The American Legion on Sept. 1, at the 103rd National Convention in Milwaukee. He pledged to make the Legion’s “Be the One” suicide prevention initiative his biggest focus during the upcoming year.
“My platform and No. 1 priority for my year as national commander will be tackling the toughest challenge facing veterans: veteran suicide,” Troiola said. “The American Legion is asking you to ‘Be the One’ ... and by you, I include every one of us, military and civilian alike. We all need to ‘Be the One’ to begin thinking, talking and acting to save just one life.”
A life member of American Legion Post 1682 in Rockland County N.Y. – and a member of Sons of The American Legion Squadron 1682 – Troiola has set a goal of raising $2 million for the Legion’s Veterans & Children Foundation.
Troiola praised immediate Past National Commander Paul E. Dillard for his advocacy in gaining passage of the Sergeant First Class Heath Robinson Honoring Our PACT Act, as well as the Legionnaires responsible for sending more than 34,000 messages of support for the legislation to their senators.
“For some members of Congress, this may have been the first time seeing the full effect and unity of our voices,” Troiola said. “But it will not be the last. We must take the spirit and message of our ‘Be the One’ campaign and pass comprehensive mental health care legislation for veterans, including establishing a national Buddy Check week. We must never forget that suicide continues to be a problem in the active-duty ranks as well. Every Legion post located near a military base should provide a welcoming environment to those still serving.”
Troiola will also continue the Legion’s push for U.S. citizenship through military service. “We must honor immigrants who have worn the uniform of the U.S. military. They took an oath to die for this country if called upon. Those who serve honorably should receive their citizenship before leaving active duty. Veterans and spouses who have not committed serious felonies should not be deported.”
And coming off the one-year anniversary of the U.S. withdrawal from Afghanistan, Troiola called for remembering those who assisted U.S. troops during their mission there.
“We must remind Congress that America always stands by its allies for freedom,” he said. “Bipartisan support exists to codify the safety of our evacuated Afghan allies. It is imperative that we offer them immediate passage to the United States. On these issues and more, we must carry the burden of leadership as America’s largest veteran service organization and most powerful voice for veterans, national security and 100 percent Americanism. I ask that you join me in this fight.”
Troiola served in the U.S. Navy and Navy Reserves from 1969 to 1974. He spent his entire professional career in the automotive service industry, retiring in 2017 as director of service and parts at a New York Metro Mercedes Benz dealership. After a brief time at home, he began an entirely new career as a school bus driver for the Falmouth School District and part-time motor coach operator.
He has served in many offices and position within The American Legion, including department commander of New York and chairman of the Legislative Commission, Veterans Employment and Education Commission and the Membership and Post Activity Committee. He served as a national vice commander for 2016-17.
SAL and Auxiliary
For 2022-23, Chris Carlton of Indiana was elected Sons of The American Legion national commander, and Vickie Koutz of Indiana was elected Auxiliary national president.
Tags: Digital Dispatch