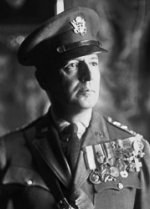 When he received The American Legion's Distinguished Service Medal in1942, Gen. Douglas A. MacArthur had already served as chief of staff of the U.S. Army, retired from active service, served as adviser to the Philippines, and returned to active duty as supreme Allied commander of U.S. forces in the Pacific.

In Australia during the Legion's convention, MacArthur was represented in Kansas City, Mo., by Maj. Gen. James A. Ulio, the Army's adjutant general.

"When America's fortune in this war was at its lowest ebb, the hearts of the nation cherished the name of a very gallant leader," National Commander Lynn Stambaugh told convention delegates. "Fighting against hopeless odds, the Army of the Philippines in its magnificent stand became exemplified to all of us in the person of its daring leader. Day by day, we who were safe at home repeated the name of that soldier of soldiers, man of men, Douglas MacArthur.

"Dashing leader, audacious fighter, this soldier carried on. We came to see in him those qualities of individual valor which are the stuff of heroes."

Ulio responded, "In accepting this high honor for Gen. Douglas MacArthur, I use the simple greeting which he would choose if he were here today: ‘Fellow soldiers.'

"A quarter century has passed since most of you put off the uniform which you won at his side. For him, you wear it still. No act of his country could bring him more satisfaction than this evidence that he lives in your memory, too, as a soldier - a great soldier."

Born to a military family in Little Rock, Ark., in 1880, MacArthur became one of America's most decorated war heroes. He served as chief of staff of the 42nd Division in France during World War I, chief of staff of the U.S. Army from 1930 to 1935, and military adviser to the Philippines from 1935 to 1941. During World War II, MacArthur led U.S. forces in the Pacific as supreme Allied commander. He accepted Japan's surrender in 1945 and oversaw the occupation until 1951. When the Korean War erupted, he was designated commander of the United Nations Command in the Far East. However, when he disagreed with the president's war policy, Truman relieved him of his duties.

In his later years, MacArthur advised presidents Eisenhower, Kennedy and Johnson. When he died in Washington in 1964, at 84, he laid in state in the U.S. Capitol rotunda.