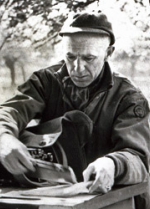 Shaped by the simplicity of his childhood days in Indiana, wartime journalist Ernie Pyle had a knack for telling the stories of the common person as he traveled across the nation. He did the same from the battlefields of World War II, until his death on Ie Shima in April 1945.

"When he became involved in this great World War II, his characters, the characters about whom he wrote, went to war by the thousands, and it was natural that Ernie Pyle went to war with them, and it was only natural that he became the spokesman for the boy from the farm, the small town, who we know today as GI Joe," said Past National Commander Lynn Stambaugh, presenting Pyle's Distinguished Service Medal to his aunt, Mary Bale, in 1945.

A small-town farm boy, Pyle started writing about people like himself early on, and eventually wrote six columns a week for 10 years for Scripps Howard newspapers nationwide.

Pyle served in the Navy during World War I, and his fans included the soldiers about whom he wrote when he joined them on the battlefields of World War II. The war correspondent was rarely without a story to tell, and he feared becoming one of those stories, as he did when he was killed by Japanese gunfire.

Hearing of the 44-year-old correspondent's death, President Truman said, "Nobody knows how many individuals in our forces and at home he helped with his writings. But all Americans understand now how wisely, how warmheartedly, how honestly he served his country and his profession. He deserves the gratitude of all his countrymen."

Pyle's legacy lives on today, especially at Indiana University, where the School of Journalism is housed in Ernie Pyle Hall. The folksy correspondent left IU within a semester of graduation because he thought he was ready to go it on his own as a newspaperman. He returned to campus in 1944 to receive the school's first honorary degree of humane letters. That same year, he earned a Pulitzer Prize while still writing about the common soldier.