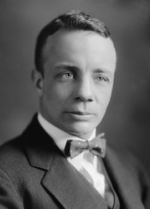 In 1919, after fathering for the creation of The American Legion, Roosevelt fought off all efforts to be elected national commander. A quarter of a century later, his widow, Eleanor, accepted a Distinguished Service Medal on her husband's behalf.

A presidential son, Roosevelt enjoyed living like a common soldier and Legionnaire, ignoring the limelight. But Past National Commander Hanford MacNider reminded the 1945 delegates of Roosevelt's importance: "No man could be a more fitting recipient of any honor which this organization could bestow that the big-hearted fighting American in whose mind and heart it first took form ... If any citizen in our generation - and we can extend his influence over several generations - ever exemplified a fighting, soul-deep obligation to his community, state and nation, Ted was that man."

Eleanor gratefully accepted the award, saying that her husband "loved the Legion, and he always felt he was the Legion's own."

Son of President Theodore Roosevelt and estranged cousin of President Franklin D. Roosevelt, "Ted" earned plenty of distinction in his own right, including fighting in both world wars. Between them, he served as governor of Puerto Rico and governor-general of the Philippines. While in Puerto Rico, the number of Legion posts there grew from four to 53, thanks to his promotion of the organization he helped found. Although the Republican Ted was at odds with the Democratic contingent of the Roosevelt clan, partisanship played no role in Legion business.

During the Legion's early years, Roosevelt declared, "First, the organization should be nonpartisan, concerning itself possibly with policies, but never with partisan politics. Second, its membership should be comprised of servicemen and women, regardless of whether they served overseas or were unfortunate enough to have their duty keep them in this country. Third, it should be really civilian, and its councils, general and private, admiral and gob, should be treated on the same basis."

His Legionnaires never forgot him. His 1945 Distinguished Service Medal was awarded shortly after his death from a heart attack at 56. In 1949, 30 years after he resisted calls to lead the organization, Legionnaires named him a past national commander.