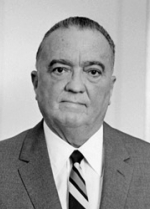 Awarding the Distinguished Service Medal to the FBI director in 1946,Past National Commander Frank Belgrano Jr. said that thanks to Hoover's work, "not one single act of enemy saboteurs or espionage agents was successful. On the first day of World War I, 62 dangerous enemy agents were arrested. Within the first 24 hours of World War II, 1,700 key figures of the enemy's fifth column were taken into custody, and this figure rose to more than 16,000 before the war was over."

Accepting the medal, Hoover urged Legionnaires to soldier on against crime and communism at home. "The American Legion is a great force for good in this nation," he said. "We of the FBI need your help now even more than during the war years if the battle for a safe and secure America is to be won. Our enemies are massing their forces on two main fronts. One is the criminal front. ... We are nearer to the days of gang control than we were a year after World War I. Add to the forces that account for a serious crime every 20 seconds, day and night, the other encroaching enemy of America, and we have a formidable foe. I refer to the growing menace of communism in the United States."

Forty-eight years and eight presidents later, Hoover died in 1972 at 77, still director of the Federal Bureau of Investigation. His name became synonymous with the FBI as it grew into the nation's large crime-fighting agency. His tenure as director was not without critics, including those who claimed he wielded too much power, leading to a subsequent 10-year term limit.

Hoover's lengthy career spanned several wars, starting during World War I, when he began working at the Department of Justice. In 1924, at 29, he was named director of the Bureau of Investigation, predecessor of the FBI he helped found in 1935. According to the FBI's Web site, in the 1930s, the agency under Hoover "attacked the violent crimes by gangsters and implemented programs to professionalize U.S. law enforcement through training and forensic assistance." In the '40s and '50s, the FBI targeted Nazi and communist espionage," and in the early years of the Cold War, investigated government employees "to ensure that foreign agents did not infiltrate the government." And in the '60s and '70s, the FBI led investigations in civil rights and organized crime.