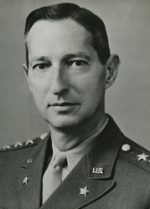 A veteran of both world wars, Clark accepted the surrender of the Germans in 1945, and presided at the signing of the Korean War armistice in 1953. The next year, he assumed the presidency of The Citadel in South Carolina.

In 1957, The American Legion honored Clark with the Distinguished Service Medal. Accepting the award, Clark called on the Legion to continue to fight communism. "Now, we must resist this evil force at work to control us and the souls and the hearts of our youngsters, and we've got to do something about it. They are our most precious asset, and they are the leaders of tomorrow," he told delegates.

With a 36-year military career on his resume, Clark wasn't done training young patriots. Before leaving the service in 1953, he accepted the presidency of The Citadel, heading the military collegeuntil he retired in 1965. He also supported programs of the American Red Cross, The Salvation Army, Boy Scouts of America, the American Heart Association and other groups.

Clark's early career included service during World War I, where he was wounded in France. Between the wars, he received more military training while advancing in rank. He spent some time in the 1940s as an Army War College instructor.

Clark commanded several forces during World War II, accepting assignments across Europe. In 1945, he was appointed commander in chief of the U.S. Occupation Forces in Austria and U.S. High Commissioner for Austria. The Citadel archives note that he rendered "distinguished service in helping feed the people, restore and maintain order in Austria, weed Nazi elements from public office and prepare the country for independent, democratic self-government."

While serving at The Citadel, Clark was appointed chairman of the task force to investigate the Central Intelligence Agency and other U.S. intelligence organizations. He died in 1984 at 87, and is buried on The Citadel's campus.