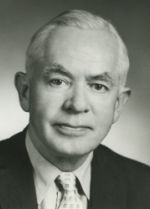 Like his father and uncle before him, Mayo used his skills as a surgeon to benefit people at his family's legendary medical facility in Rochester, Minn. A Legionnaire, too, Mayo received the Legion's Distinguished Service Medal in 1964.

Presenting the award, National Commander Daniel Foley said Mayo "has devoted his lifetime to the progress of medical science and the dissemination of knowledge on advancements recorded in the science of medicine and the exacting techniques of surgery."

The occasion marked the centennial of the birth of the Mayo brothers, Charles and Will, who founded the Mayo Clinic, as well as the 50th anniversary of the Mayo Foundation. For nearly 40 of those years, the younger Mayo served humanity with his talents.

Receiving the medal, Mayo told Legionnaires, "I am more honored and certainly more deeply impressed than most of you realize, by the award of your Distinguished Service Medal to me, for the age of The American Legion and the Auxiliary is now a sturdy 45 years, and I have been a member of it for 44."

Raised in a family of physicians and himself the father of yet another doctor, Mayo did extensive work in abdominal and colonic surgery, and was known worldwide for his medical contributions to society.

Mayo was a member andlater served as chairman of the Special Medical Advisory Group to the Veterans Administration. President Eisenhower appointed him to the U.S. delegation to the United Nations.

In addition to his roles at the family clinic and foundation, he had served as editor of the journal Postgraduate Medicine, and as board chairman of the University of Minnesota. He was killed in a car accident in 1968, on his 70th birthday.