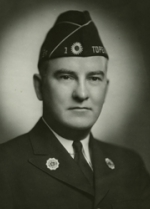 Considered the principal architect of the GI Bill, Colmery was the first past national commander to earn the Legion's Distinguished Service Medal in 1975.

"No one deserves it more," National Commander James M. Wagonseller said. "All veterans of World War II owe him a debt of gratitude."

Modest about his efforts, Colmery praised his fellow committee members. "This is an appropriate occasion for me to express my sincere pride in having been a member of The American Legion since its beginning in 1919, and in having participated, constantly, over the years, in its good works," he said.

Even as Vietnam generated controversy nationwide, Colmery urged Legionnaires to support patriotic causes. "Get on the beam and help exemplify our first principles of an unselfish service to God and country. Grave problems lie ahead," he said. "The American Legion needs your help. And frankly, in my opinion, the country needs the help of The American Legion."

A Kansas attorney, Colmery served stateside during World War I as an Army Air Service pilot. Drawing upon his personal experiences of leaving the service with little help in planning his future, Colmery was determined to improve the transition for World War II veterans.

Holed up in Washington's Mayflower Hotel for five months, Colmery hand-wrote page after page of the GI Bill of 1944, which granted war veterans an array of rights and later served as a pattern for programs to aid Korean War and Vietnam War veterans..

Colmery served as national commander in 1936.The Colmery-O'Neil Veterans Administration Hospital in Topeka, Kan., is named for him. He died in 1979, at 88.