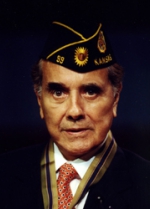 Accepting the honor, Dole said, "Whether you served in World War I or II, or in Korea, or in Vietnam or Lebanon or Grenada, Panama or the Gulf, we will never forget our responsibility to those who have worn the uniform at home or abroad in service to our great nation."

As co-chairman of the campaign to build a national World War II memorial, Dole thanked Legionnaires for their contribution to the effort. The memorial was dedicated in 2004.

"Just as the Legion has been united in the support of the memorial,the effort behind the war was a tremendous coming together of Americans from all walks of life. It was the collective spirit which made us victorious," Dole said.

A World War II Army veteran, Dole suffered combat injuries that left his right arm paralyzed, prompting him to carry a pen in his right hand so others wouldn't reach to shake it.

Dole's lengthy political career started in 1950, with his election to the Kansas House. Ten years later, he was elected to the U.S. House, serving until 1969, when he moved to the Senate. He served there until 1996, when he resigned to run for the presidency on the GOP ticket. In 1976, Dole was President Ford's running mate.

Since leaving politics, Dole has worked for a Washington law firm, and has been writing, speaking and consulting. In 2003, the Robert J. Dole Institute of Politics opened at the University of Kansas. In 2007, President George W. Bush named him and Donna Shalala as co-chairs of a commission to investigate military care at Walter Reed Army Medical Center.