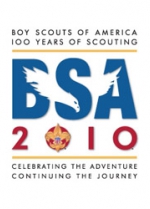 “In 2009, service projects were conducted by more than 2.8 million youth members and more than 1.1 million volunteers. Nearly 37 million service hours were given by members of this great organization last year in projects ranging from community cleanups to military appreciation. Simply put, the Scouts stand for God, country and service.”

Terry responded, “Boy Scouts of America accepts this award with humility, but wants you to know that … in this, our centennial year, (we) are planning to be around for another, second century and beyond.” He added, “In a world where the only constant is change, and where all values are shifting, and ethics are often situational, (boys) need a firm foundation on which to build the lives of character, service, leadership and achievements – lives like you have helped build.” He then led convention delegates in reciting the Scout Oath.

Founded in 1910, Boy Scouts of America was modeled on the Scouting program in Great Britain, with the goal of developing character and skills in young men so they might become productive, patriotic, community-minded adults. Its mission statement today remains mostly the same: “to prepare young people to make ethical and moral choices over their lifetimes by instilling in them the values of the Scout Oath and Scout Law.”

BSA’s purpose is a complement to the Legion’s own stated commitment to support the wholesome development of American children. In addition to sponsoring Boy Scout troops across the country at the local level, the Legion annually recognizes an Eagle Scout of the Year with a college scholarship, gives a Square Knot Award to Legion family members who work to further the Scouting program, and awards the Frank N. Belgrano Scouting Trophy annually to the department that renders the most outstanding service to Scouting. The American Legion has stood with BSA through sustained legal attacks on its membership standards.