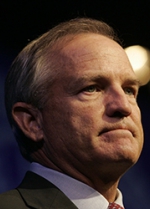 Former U.S. Democratic Rep. Chet Edwards was honored with the Distinguished Service Medal at the 93rd National Convention in Minneapolis for his unflagging support of Legion principles during his time in office.

National Commander Jimmie Foster, in presenting the award, lauded Edwards as "a true champion for veterans and American Legion issues ... although his district was in Waco, Texas, his legislative record benefited veterans everywhere.

"He also played a key role in enacting the Post-9/11 GI Bill, legislation that he publicly said would not have been passed without The American Legion." Foster concluded, "He may have left Congress, but veterans are still in his heart."

Edwards replied, "I accept this Distinguished Service Medal today on behalf of my father and all who served with him, and on behalf of all the inspiring men and women who serve or have served and who I have met.

During his 20 years (1991-2011) in Washington, Edwards co-chaired the House Army Caucus; and served on, among others, the Budget Committee, the Veterans Affairs Committee and the Appropriations Committee. As a senior member of the latter, he was the first to allow the Legion's National Security and VA&R directors to speak on appropriations bills. In 2007, after becoming chairman of the Subcommittee on Military Construction, Veterans Affairs and Related Agencies, he championed a $17.7 billion increase in funding for veterans benefits and health care, the largest in VA's history.

Edwards' commitment to veterans and the issues close to their hearts is long-standing. He received the Legion's Public Service Award in 2008 for his work on behalf of VA funding, national security, the flag amendment and more; and these issues were always before him, as his congressional district included Fort Hood. His first job after graduating college in 1974 was working for Rep. Olin E. Teague, who had himself received the Distinguished Service Medal in 1970. And his father was a naval aviator in World War II.