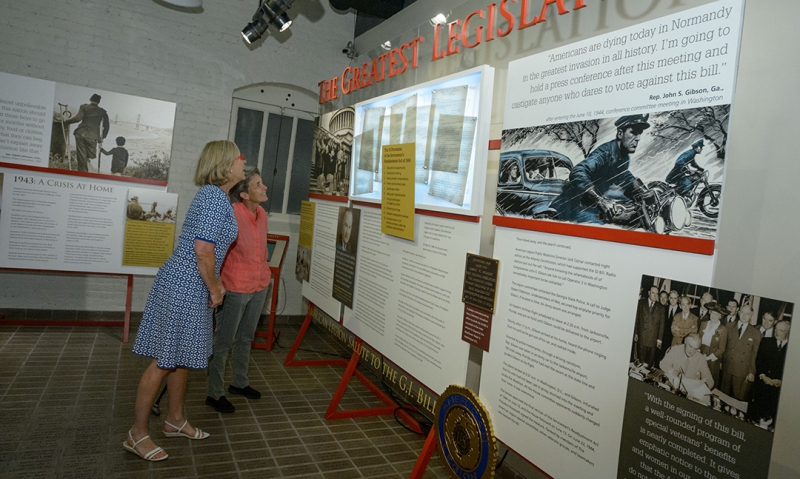 Bob Hope Patriotic Hall welcomes “The Greatest Legislation: An American Legion Centennial Salute to the GI Bill,” a multi-media exhibit, with a public reception and moderated panel discussion Jan. 17 at the historic home of the Los Angeles County Department of Military & Veterans Affairs, 1816 S. Figueroa Street, Los Angeles. A reception begins at 5:30 p.m., followed by the discussion and audience participation beginning at 6:30 p.m. Admission is free.

Veterans and families whose lives have been influenced by the GI Bill, originally passed as the Servicemen’s Readjustment Act of 1944 under the leadership of California’s Warren B. Atherton during his term as national commander of The American Legion, are invited to share their stories about the GI Bill, which has been described as the most significant social legislation of the 20th century.

Dr. Jennifer Keene of Chapman University, author and distinguished scholar of World War I history, will discuss the GI Bill as one of the most significant accomplishments achieved by veterans of the First World War, who drafted the original bill and fought through its critics, Congress and a late-night Georgia rainstorm to make the measure a reality. Keene, president of the Society of Military History, is a master scholar chosen by the United States World War One Centennial Commission to provide professional training for educators about the First World War’s place in history. The program is supported by an American Legion grant.

American Legion Past National Commander David K. Rehbein of Iowa, chairman of the organization’s 100th Anniversary Observance Committee, will moderate the panel discussion at Patriotic Hall. Also speaking at the event will be Verna Jones, executive director of The American Legion, and panelists who will discuss the continuous effort to make the GI Bill a powerful benefit of military service and fuel for the U.S. economy. Scheduled panelists include U.S. Coast Guard Lt. Cmdr. Raymond Jackson, Los Angeles-Long Beach Maritime Safety and Security Team; UCLA student and Army veteran of Iraq and Afghanistan Sarah Horton; and John Kamin, Iraq combat veteran and assistant director of The American Legion’s Veterans Employment and Education Division in Washington.

“The Greatest Legislation: An American Legion Centennial Salute to the GI Bill” is a traveling exhibit that features illustrated panels and more than 20 videos in touch-screen kiosks. It will be at Patriotic Hall through March 2018.