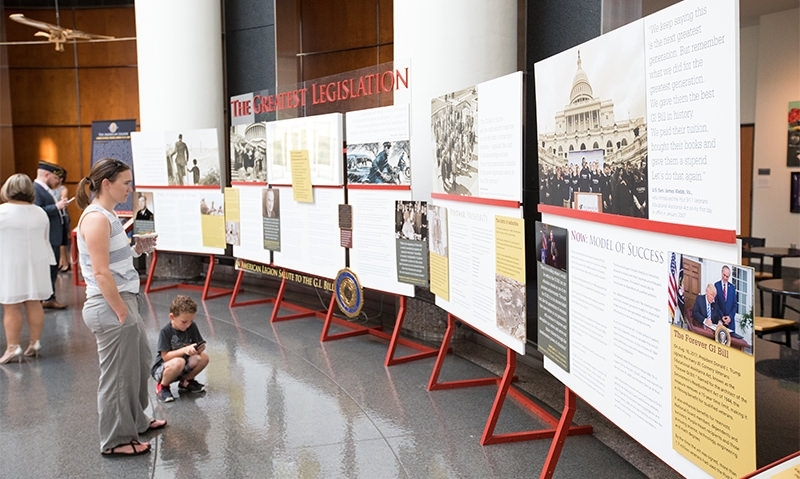 A quote from the 41st U.S. commander-in-chief, a 58-mission World War II combat aviator, states his top priority after discharge from the Navy in 1945: “We had a lot of catching up to do. I needed to get my degree and go into business as soon as possible. I had a family to support.”

Seventy-three years later, his words resonated in the George H.W. Presidential Library and Museum, which contains his records and the story of his life and presidency, at College Station, Texas. There, a moderated panel discussion Thursday welcomed “The Greatest Generation: An American Legion Centennial Salute to the GI Bill” traveling display and recognized the 10th anniversary of the Post-9/11 GI Bill. The American Legion Department of Texas coordinated the event.

“Opportunity” was the operative word of the panel discussion. Texas A&M student veteran Alyssa Knuth, a U.S. Marine Corp veteran, says the Post-9/11 GI Bill “influenced my decision to enlist because it gave that opportunity to me. For me, personally, college wouldn’t have been an option. I’m Hispanic. I’m a woman, and I’m from a town of about 800. Now, I’m able to get an education and a career to be able to provide for myself and my daughter, and I’m very proud to be a first-generation Aggie. I’ve asked my peers about what the Post-9/11 GI Bill means to them, and I kept hearing the same word: opportunity.”

Retired U.S. Marine Col. Gerald L. Smith, now director of Texas A&M’s Veteran Resource and Support Center, talked about the opportunity the GI Bill creates not only for education but for the larger transition to civilian life.

“It’s all about the transition,” Smith said. “These veterans, when they come back to us for higher ed, they’re unemployed for the first time in typically five to eight years, and they’re making the transition to becoming a civilian, maybe a student again for the second, third or fourth time. So, what we focus on at Texas A&M is what we call ‘Application to Vocation.’ It starts as early as we can connect with them. It’s not graduation that’s the goal. We seek to get them re-employed, back in the workforce as a contributing member of the community. That’s the ultimate goal.”

Smith said he found a 1947 study that showed Texas A&M veteran students were outperforming their non-veteran classmates. That finding proves true today, he explained. “Our student veterans get employed at about a 2-3-percent higher rate than all students, and their average salary is about 4-6-percent higher. They are extremely successful. We are back to the future with this generation, with a little bit of transition assistance. They are ideally suited to be leaders on our campus, in our community and classrooms.”

More than 100 attended the event at the Presidential Library and Museum, which will display the traveling exhibit of illustrated panels and video kiosks until Aug. 15. It will then be moved to Minneapolis for presentation at the 100th American Legion National Convention.

The exhibit details the crisis situation when 75,000 medically discharged GIs per month were coming home to scant support in 1943, and how The American Legion crafted an omnibus bill to not only assist with their health-care needs but also their economic hopes and dreams. The exhibit describes the dramatic fight to pass the Servicemen’s Readjustment Act of 1944 and the world-changing effects that came from it, along with recent improvements since the Post-9/11 GI Bill was passed and enacted.

American Legion Media & Communications Commission Chairman Walter Ivie of Texas, who moderated the panel discussion, said it’s important for the organization to share this story during the centennial because it shows what can happen when veterans work together to effect positive change.

“It is not uncommon for a young veteran to think that the GI Bill was the product of a politician or a VA committee,” Ivie said. “People today, veteran or not, are often surprised to learn that the GI Bill was a grassroots initiative that became law because veterans – in particular The American Legion – believed in themselves and the power they had to improve our nation.”

Operation Iraqi Freedom Army veteran John Kamin, The American Legion’s assistant director of Veterans Employment and Education, told the crowd that in the years following World War II, the GI Bill gradually lost some of its value as the government backed off on the cost. In 1988, he noted, a study reported that the original GI Bill produced $7 in return for every $1 of federal investment. The American Legion-supported Post-9/11 GI Bill, passed by Congress in 2008 and implemented in 2009, aimed to return the benefits package back to its post-World War II impact for veterans and the economy.

The Harry W. Colmery Veterans Educational Assistance Act of 2017 – named for The American Legion past national commander credited as the architect of the original legislation and nicknamed the “Forever GI Bill” – was a significant step toward bringing the current benefits package on par with the Servicemen’s Readjustment Act of 1944.

“The concern for The American Legion, when we looked at this history of benefits, tilting on its axis between what we knew was right and what ultimately fell victim to saving government funds – even in the face of how successful it was – we knew that the benefit had to be forever,” Kamin said. “So, we eliminated the 15-year expiration date on benefits, knowing that in 2018, education is ongoing. It’s not as if you stop learning after you get a bachelor’s degree. This bill ensures that veterans can use that benefit whenever they want.”

“The Forever GI Bill is aptly named,” Smith added. “There’s a quote on the exhibit from (Student Veterans of America President and CEO) Jared Lyon: ‘There’s no telling where I would be without the GI Bill. It’s my sincere belief that the generations of veterans who came before my generation will continue to improve and strengthen our nation as citizens through the transformative power of education.’ The ability for this generation to have that reserve to go back and experience that transformative power of education, I think, is one of the key benefits of this new legislation.”

Kamin made the point that the message of the GI Bill cannot get lost in history. “It’s important to keep telling this story of the GI Bill,” he said. “We need to remind everyone that a veteran is not a charity case but a sound investment.”

The origins of the measure were not lost on Knuth. “I’d like to thank The American Legion for this greatest legislation and for the opportunity to have this exhibit here, so that we can learn about the GI Bill and its history. We are all benefitting from it now. And it’s providing us with opportunities which are limitless.”