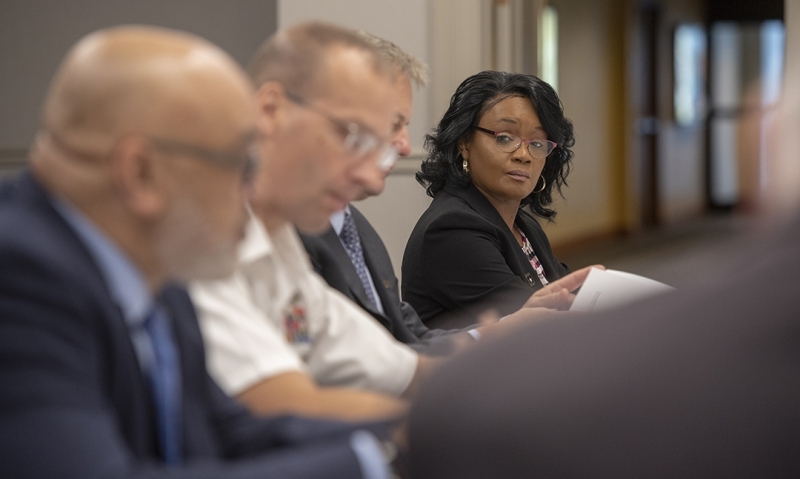 Identifying how to source veterans seeking employment and accessing servicemembers before they separate from the military were two challenges that several private employers said they currently face. This discussion was the focus of The American Legion’s Employment Innovation Task Force roundtable in Minneapolis on Aug. 27, which involved federal agencies, private employers, and members of the Legion’s Veterans Employment and Education Commission.

It’s the second time the task force has convened since The American Legion’s Washington Conference in February, with the objective to assess veteran employment and transition issues.

Guest speaker Jack Fanous shared an employment resource that was of interest to the task force.

JobPath is an online veteran employment job searching, job training and mentoring site that is drawing 24,000 new veteran users every month. Fanous, co-founder and CEO, launched the online portal as a way to address many of the concerns that veterans were facing when attending a job fair – not finding a job or being told to go back home and apply for jobs online. “Many veterans took that as a brush-off, that they didn’t really want to hire me, they just wanted to get me away from the booth,” Fanous said.

JobPath is a technology-based solution, the likes of Google or LinkedIn, that’s built for veterans, transitioning servicemembers and spouses. It got underway five years ago but the first two years were spent writing 7,500 military occupational specialty (MOS) translations so that when veterans upload resumes “they speak corporate America speak,” Fanous said. The site is free for veterans and their families and provides recommendations on the type of jobs veterans should be applying for; what licenses and credentials they are eligible for based off their MOS; connects them with jobs that are locally based off their MOS; and connects them with jobs based off their career interest. Other training tools include connecting veterans with their VA and education benefits.

About 1,000 employers are working with JobPath and pay a monthly fee of $500 for job postings.

“Employers want to do the right thing, they want to hire veterans but they are intimidated. First of all they don’t know the language, don’t know how to approach the community, and they don’t want to ask because it makes them feel embarrassed,” Fanous said. “What we focus on is educating the employers and giving them the tools and resources to understand exactly who it is that they are hiring. We want to make sure they are hiring the right people for the right roles to increase retention numbers. Only way to get there is by educating employers and helping them understand who they’re looking at.”

Retention of veterans by employers is a criteria for the HIRE Vets Medallion Program, a Department of Labor (DoL) program that is a top priority for the department, said Timothy Green, director for Office of Strategic Outreach at DoL, Veterans Employment and Training Services. The program was established through the HIRE Vets Act that was signed into law by President Trump in May 2017, and is the only federal program that rewards employers for hiring and retaining veterans in the workforce.

In November, the first awards will be presented for the program’s demonstration group where 300 companies applied. The HIRE Vets Medallion Program will be fully implemented in January 2019 for companies to apply.

Companies can use the medallion as a marketing tool. And a list of the program’s recipients will be given to transitioning servicemembers.

When the task force was asked about what they need to recruit more veterans, TAP was mentioned.

“We hire 35,000 employees a year and we are in 48 states. I would love to bring recruiters up to interact with TAP candidates and do nothing more than mock interviews and resume reviews,” said David Gaulin, director of Military and Veteran Affairs for Comcast NBCUniversal.

Improving access to TAP is one of the things that the new TAP curriculum addresses. As part of the revision, VSOs will be invited to speak for 15 minutes and connect with the servicemembers, said Meredith Bedenbaugh-Thomas, assistant director of Military to Civilian Transition with Department of Veterans Affairs Transition Economic Development (TED).

“I think it’s a good idea to bring employers in (to TAP) … I think the key there is that individuals who are going through transition get to see this whole process humanized by looking at a person with a heartbeat and going, ‘Oh, you’re an employer and I may have an opportunity to work for your company,’” said Chris Davison, veteran recruiting and warrior integration program manager for Talent Solutions. “I think that does a lot rather than having an instructor talk to you, the VA coming in, and then they go out say, ‘Here’s my resume, now what?’”

Green said DoL will have improvements to TAP as well, especially on the employment workshop side. Military separation preparation will start 365 days out and will include a career assessment before the employment workshop. TAP is now about “how can we make the transition experience the best it can be based on the new guidance we are getting from the NDAA (National Defense Authorization Act),” Green said.

And more than half of all respondents disagreed or strongly disagreed that TAP prepared them to access their VA benefits and services.

Bedenbaugh-Thomas said with the new improvements to TAP, TED will be “proactively embedding transition throughout a servicemember’s career instead of waiting till the end. Now, from the time someone enlists or commissions, we are there from day one talking about education benefits, help you make decisions early on. That’s really a big change because you’re not waiting until the end of that transition for someone to separate.”

Survey respondents also suggested that delivery of TAP tracks and information would be better handled by eBooks, downloads, videos and through social media platforms.

“This merits some further investigation into the most effective way to translate TAP information for this generation of a transitioning servicemember to pursue benefits and employment, and learn to be more effective on finances and family relationships,” said Linda Brooks Rix, Co-CEO of Avue Technologies Corp., and task force moderator.

Fanous said that at JobPath “we take the approach that TAP is local and TAP never ends. If we think TAP ends the day you separate, that’s the number one reason why we’re failing transition servicemembers.”