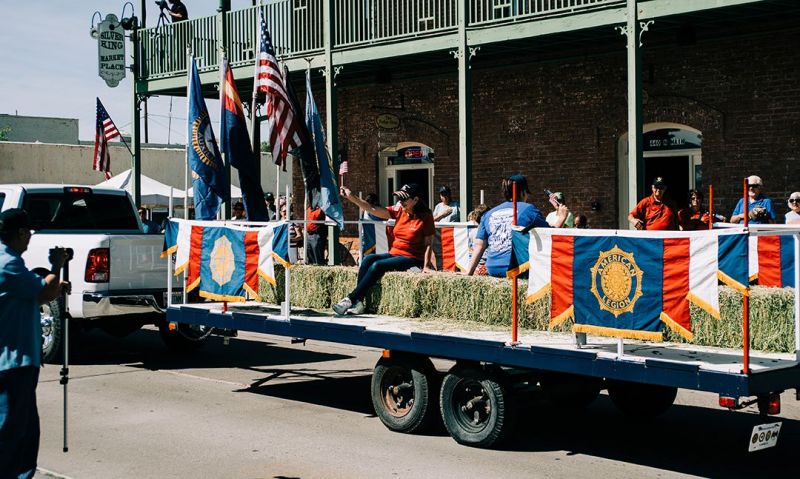 American Legion Family members celebrate the 75th anniversary of the GI BIll during a parade in Florence, Ariz., on March 30. Photo by Ash Ponders/The American Legion

The town of Florence, Ariz., paid tribute March 30 to one of its most famous former citizens: Ernest W. McFarland, the U.S. senator who sponsored the Servicemen’s Readjustment Act of 1944, 75 years earlier. Drafted initially on stationery at the Mayflower Hotel in Washington, D.C., by American Legion Past National Commander Harry Colmery, the GI Bill was signed into law by Franklin Roosevelt on June 22, 1944.

McFarland, along with 1943-1944 American Legion National Commander Warren Atherton, shepherded the legislation through Congress and are jointly considered the “fathers of the GI Bill.”

The day began with a parade through the center of Florence, a town of around 33,000 people roughly an hour southeast of Phoenix in Pinal County. Bordered to the east by the scenic Superstition Mountains, Florence is one of the oldest towns in the area and its National Historic District has more than 25 buildings listed on the National Register of Historic Places. The parade featured a horse-mounted color guard, floats from various local civic groups and politicians, and old jeeps. Children carrying small American flags lined the sides of the main street and scrambled to recover candy thrown by those in the parade – like Department of Arizona American Legion Commander Steve Aguirre.

“It is extremely important that the Legion Family must continue to think outside the box when it comes to educating the veteran community and the general public about our mission and the accomplishments of the organization,” said Aguirre, noting the importance of Legion visibility in community events like this.

“We, as veterans and members of the largest wartime, all-volunteer veterans organization in the world, know our story of community service, programs for our youth, veterans advocacy, promoting Americanism and advocating for a strong national defense,” he said. “Yet there are thousands of veterans families in our communities that have never heard us explain who and what The American Legion does for veterans and the community at large.”

“It feels great to know that The American Legion was instrumental in not only myself and others receiving this benefit, but I also went as far as to find out that in 2017 President Trump signed the Forever GI Bill extending the allowable time period for veterans to pursue educational opportunities.”

McFarland family members served as grand marshals for the parade and spoke at a gathering in the town’s park afterward.

“My grandfather, Ernest McFarland, who preferred to be called ‘Mac,’ would be deeply honored that his hometown people here in Florence are recognizing him and his works here today,” said John D. Lewis, McFarland’s grandson. “The hardest job that my brothers and sisters and I have here is as we go out to preserve my grandfather’s legacy, is that my grandfather did so much.”

Indeed, it would be difficult to overstate the impact McFarland had not just on Florence but all of Arizona.

“If Arizona had a Mount Rushmore, the men on it would be Carl Hayden (a longtime Arizona U.S. senator), Ernest McFarland, Barry Goldwater and John McCain,” Arizona State Historian Marshall Trimble once noted.

Born in an Oklahoma log cabin in 1894, McFarland enlisted in the U.S. Navy following the outbreak of war in 1917. Sent to the Great Lakes Naval Station to train, McFarland became ill with a lung disease that left him hospitalized for 10 months and nearly killed him. Following his honorable discharge two years later, McFarland moved to Arizona as doctors felt it would be a better climate for him to recuperate in. McFarland studied law at Stanford before returning to Pinal County to pursue his legal career, where he served as county attorney and then was elected as a Superior Court judge.

In 1941, McFarland ran for U.S. Senate, handily winning both the Democratic Primary and then the general election. He served in the Senate until 1953, as the Majority Leader for the final two years. Following a loss in his 1952 re-election bid, McFarland returned to Arizona where he served as governor from 1955-1959, and then as associate justice and later Chief Justice of the Arizona Supreme Court from 1965-1971. McFarland was the first, and thus far only, Arizonan to serve in the highest offices of all three branches of Arizona government.

But it was for his work on the GI Bill that McFarland made the biggest impact on veterans.

“He sponsored over 40 veterans’ bills,” noted a 2016 Arizona Times article about McFarland, “but his greatest contribution rested in drafting the portions of the Serviceman’s Readjustment Act of 1944 – the ‘GI Bill’ – that gave veterans access to education through tuition assistance, zero-down home loans, and low-interest business loans. It improved the lives of nearly 50 million ex-servicemen and women, along with millions of their dependents. According to one historian, the GI Bill generated 450,000 trained engineers, 91,000 scientists, 67,000 doctors, 22,000 dentists, 238,000 teachers, and more than 1 million other college-educated professionals.”

“My grandfather, to us, was just our grandfather,” Lewis said. “We never really knew what a political giant he was until we got older. And for me, I didn’t really realize the breadth of all he’d done until 10 years ago when I went through all his papers.”

Representatives from the office of Arizona Gov. Doug Ducey and Florence’s member of Congress, Paul Gosar, were on hand for the ceremony in the town square, as well as members of the State Legislature and Florence Mayor Tara Walter. Each brought a proclamation for McFarland’s family to mark his signature legislative accomplishment 75 years earlier.

Aguirre was humbled and honored that he could speak at the event as well, telling the story of the organization he leads in Arizona during its centennial year. “It was simply amazing how the event was educational and yet told the story of how The American Legion was involved in (the GI Bill’s) creation,” he observed.