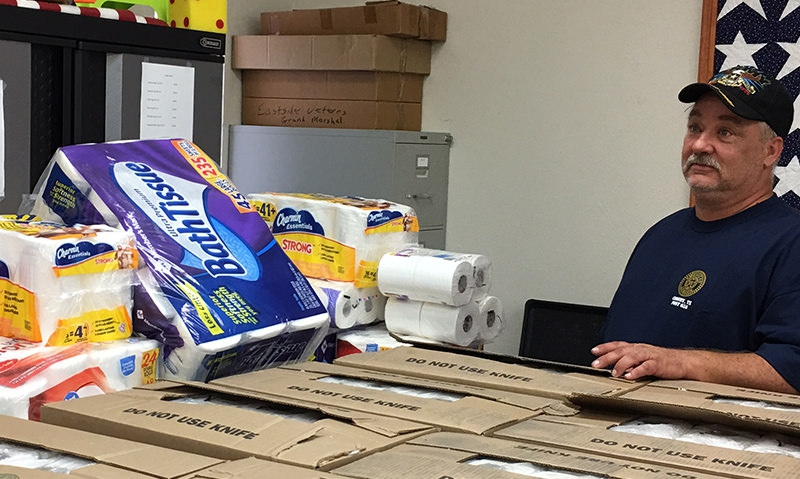 Many people would not find life in a tent city all too comfortable. Yet, when Leonardo Garcia contemplates the alternative, he chokes up.

“I’m so grateful for all these people,” he said, not just of American Legion Post 658 in Crosby, Texas, but the thousands of donors from throughout The American Legion world and elsewhere that have given his family an opportunity to rebuild their lives.

He was evacuating from Port Arthur, Texas, when water started entering his jeep on Interstate-10 during Hurricane Harvey. As water rushed up to the windows, he knew it was time to cut his losses and flee with his family if they were to survive. With his wife, Yesenia Gutierrez, daughter Vianey, and pregnant daughter Olivia Garcia, they left the vehicle and watched it become submerged by the flood waters.

They went to a nearby middle school that was filled with others escaping the storm. When a bus offered the family transportation to Post 658, they immediately accepted. Although the tents were only recently added to give some privacy to the new residents of the post, even when 375 evacuees were sheltering there, the reviews were overwhelmingly positive.

“If it wasn’t for the (Legion post) commander and these people, we don’t know where we would be,” said Steve Cummings, who evacuated with his wife, Miranda. Cummings was referring to Post 658 Commander Gary Alston, a storm victim himself who went from being responsible for his own family of four to becoming the de facto mayor of the David H. McNerny post and main emergency shelter for the town.

“We’re not just interested in helping our members or even veterans,” Alston said. “We are helping everybody. We have people who came in from Dayton, Liberty, Beaumont, Port Arthur and all over Houston. We just want to make sure everyone is safe.”

Garcia and Cummings are perfect examples. Neither are veterans but both have gained a new appreciation for The American Legion. As a son of a veteran, Cummings hoped to join the military when he was younger but injuries that he suffered as a bull rider prevented him from doing so. Garcia, whose grandfather served in the Korean War, said he plans to join the Sons of the American Legion when he starts work again.

“I like it here. These are the type of people that I want my children to grow up around,” Garcia said.

But like the other evacuees, Garcia and Cummings believe in earning their keep. They were among the people who helped cook some of the estimated 9,574 hot meals that Alston said the post has provided between Aug. 25 and Sept. 12. Alston also said approximately 2,527 people have visited to request items such as clothes, baby diapers, formula, toiletries and cleaning supplies.

The donations have come from all over the country and by the truckload. American Legion departments and posts, American Legion Auxiliary units, Sons of the American Legion squadrons, businesses and churches have kept not only Post 658 well-supplied, but other Texas Legion posts as well.

“I’m physically just not able to supply the whole state of Texas,” said Department Commander John Hince. “But the generosity of the American people has just been incredible. And we are making sure that the donations and supplies get to where they need to go. We have been working nonstop to help people throughout the whole region.”

Hince’s Post 169 in Bryan operated as an overnight home for 267 members of the Arkansas National Guard, who by all accounts enjoyed their brief stay before moving on to storm-affected areas. Post 169 Commander Steve Kim said the decision to open its doors to the soldiers was an easy one.

“We approved the request in 18 minutes,” he said, noting that the quick decision appeared to surprise even the local Bryan Army reserve unit which made the request on behalf of the Arkansas soldiers.

Further south in Crosby, Cummings marveled at the efficiency of the Legion operations. “We were packed like sardines at first, but everybody respected everybody and it’s run very smooth. The commander (Alston) suffered just like we did. He’s out of work too. If not for him, we wouldn’t be here.”