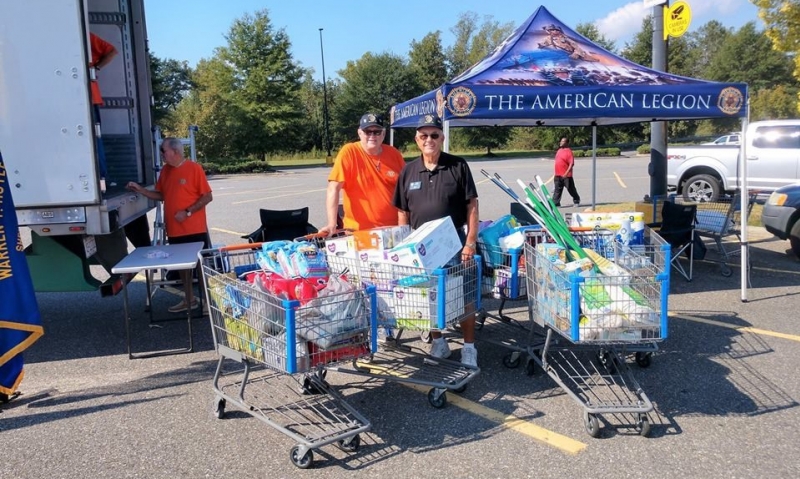 The effects of Hurricane Florence are still being felt in North and South Carolina, as flooding continues to be an issue after the deluge of rainfall from the storm earlier this month.

The death toll from Florence has reached 43, and damage is estimated to be about $50 billion.

In Shelby, N.C., home of The American Legion World Series, Post 82 members have helped load bottled water, cleaning supplies, pet food and other necessities donated by Cleveland County residents to help those impacted by the storm closer to the coast.

“We were very pleased with the response from the community and the Legionnaires,” said Post 82 Adjutant Jim Quinlan.

While Shelby and other cities in central and western North Carolina are in good shape, the eastern part of the state is in “desperate need,” Quinlan said.

North Carolina Department Adjutant Randy Cash said Post 230 in Spring Lake, N.C., had been flooded out in Florence’s aftermath. On Tuesday, he was still waiting for assessments from other areas.

In the meantime, the department has been working with agencies like Operation North State and Carolina Cavalry to get collected supplies to the areas where they’re needed.

“And I’m waiting for the influx of NEF and TFA applications,” he said.

The Department of South Carolina is waiting to see what sort of relief efforts might be necessary.

“With the initial storm there wasn’t a lot of damage,” Adjutant Nick Diener said. “There’s a lot of flooding, but those areas we can’t get into anyway (to see what needs to be done).”

Diener said Post 34 in Rock Hill, S.C., had collected care packages for the National Guard soldiers who have been sent out to help with relief efforts.

Meanwhile, the Legion Family across the nation has been doing their part to help those affected by the hurricane.

In Harveys Lake, Pa., Post 267 members and local borough officials have been collecting food, clothing and cleaning supplies to fill a trailer that will head to North Carolina next week.

And in Fond du Lac, Wis., the local SAL chapter and Patriot Emergency Response Team are collecting donations at Post 75. Brian Stenz told KFIZ-AM that “one of the biggest needs right now with the flooding is that every person who has a house is going to have to basically gut the house out, clean it out and start over.”

Cash said he’s been in contact with other departments, including the Department of Puerto Rico, where residents are still dealing with the effects of last fall’s Hurricane Maria.

“We supported them and now they have returned the favor … it’s heartwarming,” Cash said.

“This effort is going to take awhile,” Cash said. “We’re this far out from the actual storm but we’re still reeling from the floods. Wilmington and other areas are still in need of support. Continue to pray for us, and thanks to everyone for their outpouring of support.”

For American Legion post NEF grants, posts must state why they will cease to perform their duties and activities in the community due to losses sustained. Legion posts that served as community service centers during the disaster may also be eligible for a grant to offset their costs in providing food and other services to members of their community during these disasters.

Since Jan. 1, 2018, the NEF has provided more than $166,000 in grants. These grants are made possible by donations to the fund. To donate, visit www.legion.org/donate.

Additionally, The American Legion's Temporary Financial Assistance (TFA) program is available to help meet the basic needs of minor children of eligible veterans. These needs include shelter, food, utilities, clothing and health expenses. TFA grants are available to children (17 years or younger) of active-duty servicemembers or American Legion members. No child can be considered eligible until a complete investigation is conducted at the post or department level, a legitimate family need is determined, and all other available assistance resources have been utilized or exhausted.