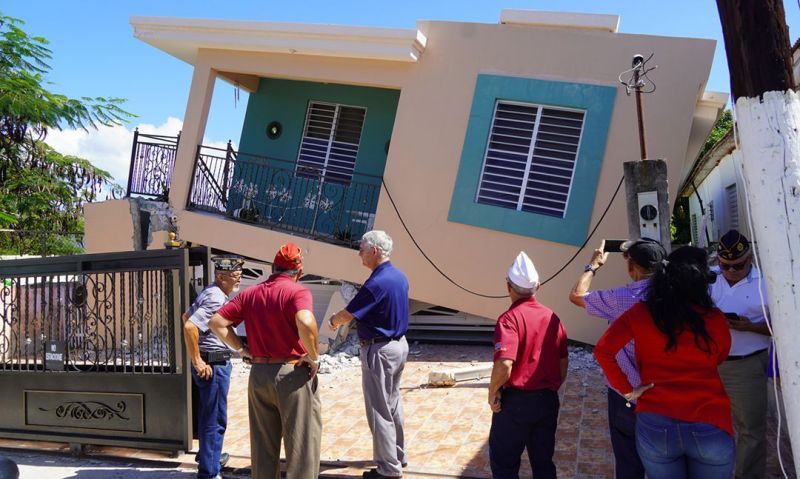 A former Army captain and veteran of the Iraq war, Manuel Martinez has slept outside before. This time, however, it is different. Martinez, 40, is not deployed and he is not homeless.

The member of Monseratte Padilla American Legion Post 47 in Cabo Rojo, Puerto Rico, has been sleeping on his front lawn along with his parents as a safety precaution. The earthquake and frequent aftershocks that have plagued Puerto Rico over the last month have dangerously impacted the structure of his house in Yauco.

“It’s just too dangerous to be inside,” Martinez said. “There are cracks throughout the structure and nobody wants to have a cement roof collapse on them.”

Puerto Rico is in need of assistance, according to American Legion National Commander James W. “Bill” Oxford, who visited the island earlier this month. “People there are hurting,” Oxford said. “They were just beginning to recover from Hurricane Maria when the earthquakes hit. The people there are resilient, but I am asking that The American Legion Family once again provide support for those in need. We also have Legionnaires living in the Philippines and Australia that could be impacted by volcanic activity and devastating wildfires. Our national staff has reached out to department leadership for those respective areas to offer National Emergency Fund assistance to those eligible. We have not yet heard from any Legionnaires impacted outside of Puerto Rico at this time, but it’s just another reminder that we have to keep our NEF fully funded and prepared. Large natural disasters can happen at any time and in any place.”

Department of Puerto Rico Adjutant Juan Cruz-Rodriguez said residents in parts of the island are feeling about five tremors a day. On Jan. 21, the website earthquaketrack.com reported 2,104 earthquakes of a magnitude of 1.5 or greater have hit Puerto Rico over the past 30 days. A large 6.4 magnitude quake struck on Jan. 7 and caused damages that are estimated to exceed $110 million.

While the National Emergency Fund provides grants to cover lodging, food and clothing for impacted Legionnaires, members of the Sons of the American Legion and damaged American Legion post homes, Cruz-Rodriguez said residents are also in need of supplies such as bottled water, diapers, toys, clothes and hygiene items. Tents are also needed by those who, like Martinez, wish to sleep near their damaged homes.

Tax-deductible financial contributions can be made online at www.legion.org/nef or by mailing checks to The American Legion National Emergency Fund, Donation Processing, PO Box 361626, Indianapolis, IN 46236-1626.

Since the NEF’s inception, nearly $9 million has been provided in financial assistance. Eligible individuals can receive grants of up to $3,000, and posts can receive up to $10,000.

“Little by little, each one of these quakes takes its toll,” Rodriguez-Cruz said. “We’ve been fortunate in San Juan, but there are other parts of Puerto Rico that have been badly affected. We’ve been reaching out to posts throughout the department (and) offering to assist.”

Though Puerto Ricans are grateful that the Jan. 7 earthquake wasn’t even more devastating, the follow-up earthquakes are a constant frustration to those who wish to start the long process of rebuilding.

“I’ve seen people who are upbeat, but I’ve also seen a lot of fear. People are scared about their future,” Martinez said. “They don’t have a clue about what to expect tomorrow. There is a feeling that all they have is each other.”