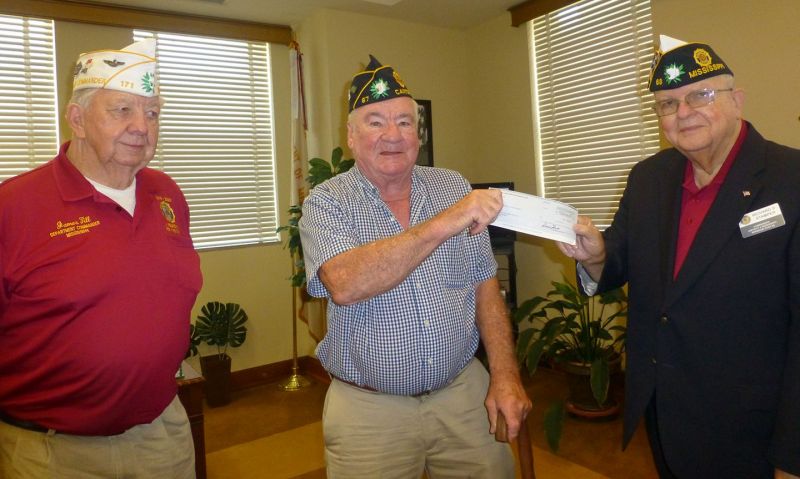 Commander Tommy Bryant of Post 67 in Canton, Miss., receives a check from the National Emergency Fund presented by District Commander Richard Stamper and Department of Mississippi Commander James Till.

Over the years, the members of Barfield-Pease-Rimmer American Legion Post 67 in Canton, Miss., have regularly donated to the National Emergency Fund (NEF).

But now, “We never thought we would have to be receiving (an NEF grant),” Post 67 Commander Tommy Bryant said.

Post 67 sits alongside the Pearl River, and earlier this year got hit with a double-blast of natural disasters. Flooding on Feb. 14 left about a foot of water in the building, Bryant said.

“We lease 20 acres from the Pearl River Reservoir Authority, and then we sublease it to our members who have basically fishing camps there, weekend places. But there’s six of us that actually live here. So all but eight places got a little water in them,” Bryant said.

Then on March 4, a hailstorm did more damage to the post.

But a $10,000 grant from the NEF, as well as insurance, are helping restore the building.

“We’ve donated to the (NEF) nearly every year. We see it really works (now that we’re a recipient). I’d rather be giving though then receiving,” Bryant said.

“I promise we’ll continue to donate to it as much as we can so that other Legionnaires can have help if they need it.”

The NEF provides up to $3,000 for American Legion and SAL members with an active membership who have been displaced due to damages to their primary residence, and up to $10,000 for posts that have been damaged by a natural disaster and whose programs and activities within the community are impacted. To apply for an NEF grant, please visit www.legion.org/emergency.

An audio PowerPoint created by National Headquarters shares what the NEF is, what it does and does not cover, the correct way to fill out an application, and eligibility. Access the "National Emergency Fund Grant Application Procedures" PowerPoint here.