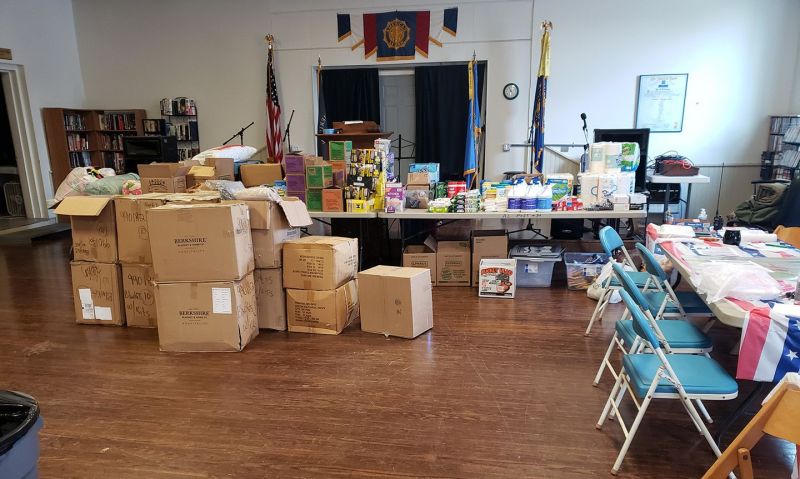 Record rainfall in central Tennessee over the weekend led to deadly, devastating flooding, most notably in Humphreys County, west of Nashville.

At American Legion Post 34 in Waverly, the county seat, Legion Family from across the state were working to collect supplies and coordinate relief efforts for those impacted by the flooding.

“The post itself, it had some damage to the roof and had water in the post but we’re actually in the building right now,” District 6 Commander and Department of Tennessee Media and Communications Chair Mike Lawler said in a phone call on Wednesday. “They were able to clean it but they’re going to have to get the roof taken care of.”

Lawler said four or five Post 34 members had seen their homes destroyed by the flooding. Some 17 inches of rain fell on Humphreys County on Aug. 21, causing flash floods which destroyed 271 homes and caused major damage to approximately 160 more.

The death toll stood at 18 on Wednesday, with three people still missing, according to media reports.

“It’s been an eye-opener for a lot of people,” Lawler said. “I guess the big thing here is it happened so quick.”

Post 34 and its members who lost homes have already received details on how to apply for The American Legion’s National Emergency Fund, and Lawler said posts across the state are already planning trips to bring supplies to the area. “The outpouring of brotherhood has been really great,” he said, noting this his post, Post 102 in nearby Camden, Tenn., had assisted with Buddy Checks on Post 34 members.

“There are still some we have not been able to get in touch with. We think they’re OK, but the phone lines are down and they may be out where the bridges have been completely destroyed and people can’t get out to them. So that’s the next thing, we’re going to get starting tomorrow … a bunch of Legionnaires from across the state and start running the back roads to see who we can help,” Lawler said.

While area churches have been able to provide clothing to displaced families, Lawler said there’s still a need for donations of cleaning supplies, gloves, underwear for all ages, and toys to keep the displaced children occupied.

“This is not a short-term effort; we’re probably going to be at this six weeks or more. Clean-up is just devastating here,” Lawler said.