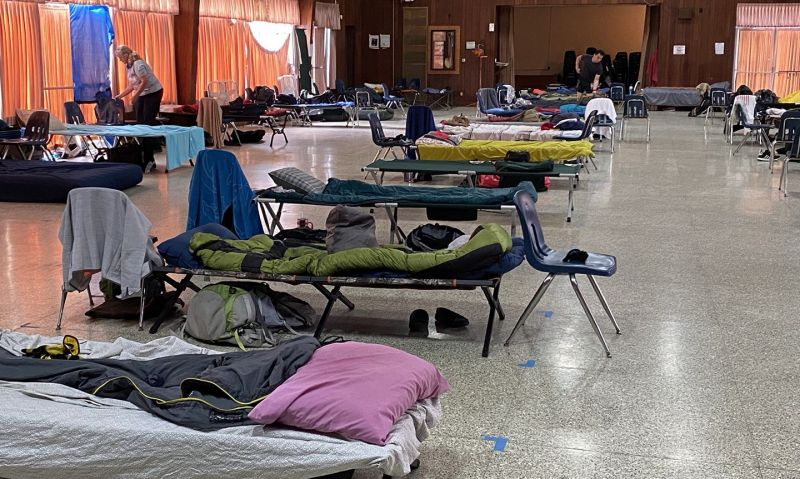 Al Hebert remembers riding out Hurricane Betsy, the 1965 storm which caused millions of dollars in damages in Louisiana and other states and prompted the building of taller, stronger levees in New Orleans.

“Betsy seemed like a pussycat compared to this storm,” Hebert said of Hurricane Ida, which made landfall near Port Fourchon, La., on Aug. 29.

Just like with Hurricane Betsy 56 years earlier, Hebert stayed home to ride out Ida, primarily because he and his wife didn’t want to risk getting caught in slow-moving traffic north of Montegut, La. But the commander of Post 272 says he won’t stay put again.

“We had no water until four days ago. Electricity, we got this three days ago,” Hebert said during a phone conversation on Sept. 22.

The devastation caused by Ida, especially in the parishes south of New Orleans, is almost too much to bear.

“It’s bad,” said Post 31 Commander Lynette Blanchard. “I grew up down there, it’s my home town in Chauvin. I’ve never seen people having to live in a tent. I’ve never seen the houses in the bayou with just the roofs showing. I hope I never have to see this again.”

Much of the damage near Hebert was caused by high winds; Ida’s 150 mph maximum sustained winds at landfall are tied for the strongest on record in Louisiana.

“(Hurricane) Katrina had water but they never had winds (like this). This has got to be the worst windstorm of a hurricane in probably Louisiana’s entire history. You’d have to see this to believe it,” Hebert said, noting the number of trees and power lines knocked down by the storm.

“This community and this parish won’t be the same for years and years to come,” he added.

“It’s going to be a long time before there’s any sense of normalcy down here,” Blanchard said. “There are so many that are displaced. I myself have five children, four of our children have substantial damage, two of them their homes are unlivable. And they’re not even down in the lower portions of the parishes. … The insurance adjusters are just getting out here. And all of this stuff takes time, and in the meantime, we’ve got mold and mildew (from floodwaters) and it presents a whole different type of problem.

“What you see in the media is just the tip of the iceberg,” Blanchard added. “The devastation to see in person, it renders you speechless; there’s so much devastation. The news media shows the New Orleans area more than anything, and we know that. It’s a big city and it’s the main tourism (destination). But it’s the lower part of the state, the seafood industry, the trawlers, the fishermen, oil fields (that have been so devastated). (The) BP (spill) was nothing, Betsy, Katrina was nothing compared to what these people have endured down here.”

While members of Louisiana’s Legion Family deal with Ida’s direct impact, they’re grateful for help coming from other departments, and other organizations.

National Guardsmen are staying at the recreation center across the street from Hebert’s post. “They’ve been using the canopy of our facility to pass out goods, to stay out of the sun,” he said. And he noted a trio of tractor-trailers filled with donated supplies from the Department of Alabama are expected later this week.

Post 31 in Houma has turned over part of its hall to Team Rubicon as that organization has mobilized to help those impacted by the storm.

“They had no power, the roof leaks in our post, there were leaks in our storage area; they cleaned everything up, they patched everything up, any time something breaks or goes wrong they patch it or they fix it, they’ve been phenomenal with our post,” Blanchard said. “And in the community they are doing so much, they are doing the muck-ups, they are doing tree removal, they’re doing debris removal, tarps, all those different types of things. They send out a crew to evaluate to see if it’s something they can handle and if it is they line up a crew to go and take care of it. They’ve been fantastic and we look forward to working with them again in the future. It’s been a pleasure dealing with them.”

Numerous other organizations, among them the Red Cross and Samaritan’s Purse, have also come in to help. And, Blanchard said, those who live in the devastated areas are also helping their communities.

“They are cooking in large amounts, they’re cooking for our linemen who are out here restoring power,” she said. “The biggest challenge that we’re having is getting the resources, the donations, the hot meals, the ice, down to the lower parts of our parishes, because that’s the hardest hit.”

American Legion posts, Legion members and SAL members who have been impacted by a declared natural disaster are eligible for grants from The American Legion’s National Emergency Fund.