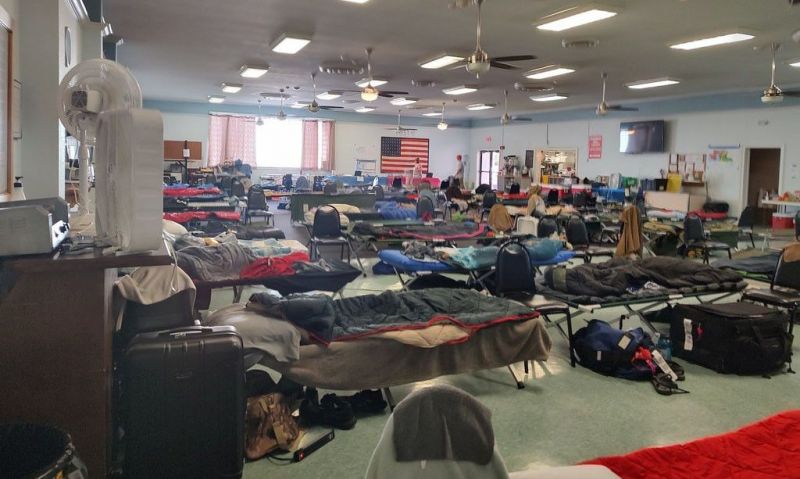 It’s a given that Legion Family are quick to respond when natural disasters strike. Here are just a few examples in the wake of September’s hurricanes, Fiona and Ian.

Puerto Rico was still suffering from the damage caused by Hurricane Maria in 2017 when the island was struck by Hurricane Fiona last month.

“(The) infrastructure really wasn’t rebuilt really well. And so even though this was a much less powerful hurricane, it really affected the island in a great way,” said Marcos Torres, commander of American Legion Staff Sgt. Jason Vasquez Post 939 in Chicago.

With Puerto Ricans in desperate need of solar kits, water filtration systems and batteries, Post 939 has joined with the Puerto Rican Bar Association and Puerto Rican Police Association for a disaster relief fundraiser on Oct. 10 at Vera Lounge, 3235 N. Central Ave., Chicago. Proceeds from ticket sales as well as donated items will go to relief efforts in Puerto Rico; donations may also be made online. Click here for more information.

“I think it’s important for the Legion to get involved like this because right now you have cities like Flint, Mich., that don’t have clean water; Benton Harbor, Mich., that are having to boil their water; there’s a town just south of Crestwood, Ill., that’s also having these issues; Mississippi,” Torres said. “We live in the United States of America, and in the United States of America, people should have the basics — access to clean drinking water and access to electricity. And if we don’t have these things in our country, as veterans we must stand up and say, ‘Hey, this is wrong … this needs to change immediately.’

“… I think this is Americanism right here, because if we see a community in need in our country and we’re not standing up for them in a big way, saying how can we wrap our hands around the situation and help them out, I don’t feel like we’re upholding that pillar,” he added.

‘Guys, just take what you need’

“The incident commander was talking to my second vice, and they said, ‘Can we do this?’ It was simple decision; they’re veterans serving our community.

“That’s part of our charge, so I just said, ‘Guys, take what you need,’” Dollinger said.

Team Rubicon communications lead Connie McNamara said incident commander Matthew Watson and a few other team members, called “Greyshirts,” were driving through the area looking for a place where they could house the 50-plus volunteers who Team Rubicon had sent to the area in Ian’s wake.

“Within an hour, all the details were set up and we had ourselves a place to stay. It was an incredible experience and again, we can’t be more appreciative of them welcoming us in,” McNamara said.

Team Rubicon plans to have about 300-500 Greyshirts in the areas affected by Ian by this week. The veterans and first responders are doing roof tarping, tree and debris removal, and muckouts, all at no expense to those impacted by the hurricane.

‘Wish I could do more’

Although she’s not a Legion Family member herself, photographer Joy Hmielewski comes from a family with a military background — two brothers who are veterans, and her aunt, Jan Farrington, is president of the American Legion Auxiliary Department of Florida’s 13th District, one of the hardest hit districts in the state.

“They have been going non-stop the second they could to locate a way to help other members,” said Hmielewski, who spent many years in the Cape Coral and Fort Myers area.

Watching the news in Ian’s immediate aftermath, Hmielewski felt she had no choice but to find a way to help.

“Since it took about 48 hours to figure out my plan, I decided to put up a quick post on Instagram and Facebook asking if anyone had supplies to give me so that I could take them down. Within one day I filled my 4Runner! I actually had to tell people to stop bringing things because I had no more room,” she said.

“It was really a touching moment to realize how many people will jump up in the face of a disaster to help others. My plan was to reach my family and friends first and then make sure the rest went to a place where people could get it immediately. …

“I called Jan and told her I wanted to drop off supplies while I was in the area and she had me take them to Lehigh Acres Post 323, which was one of the only posts in the area without significant damage.”

Hmielewski said she was heartbroken when she saw the devastation in person.

“I feel pretty helpless and wish I could do more. Being a photographer, I have drone photos of Fort Myers Beach that hang on my wall and looking at those photos now feels unreal,” she said. “It’s hard to find words, but I know with the determination and persistence of everyone coming together we will rebuild the places we love and be a stronger community because of it.”