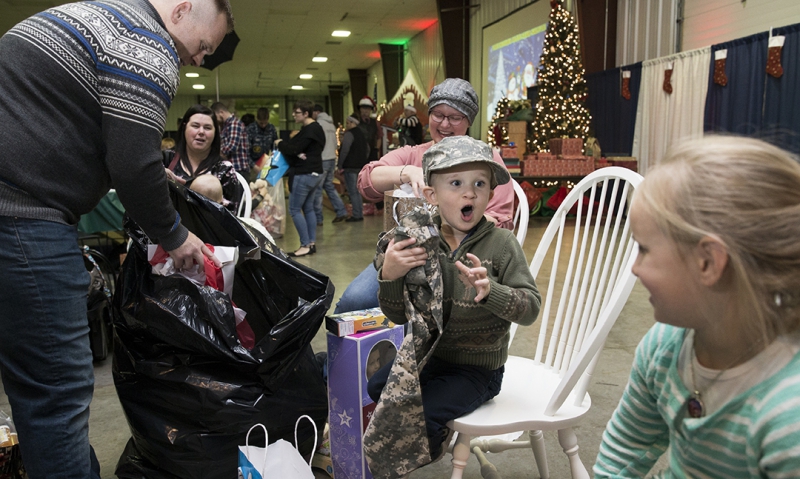 Jeremiah Myers, center, gets excited after unwrapping a set of Army fatigues with his family at the Indiana Blue Star Spirit of Christmas event in Avon, Ind., on Saturday, December 16. Photo by Mike Fender/The American Legion

Since his home was burglarized nearly four years ago and everything stolen, down to the wiring, Eric Cass has been living in temporary housing and trying to get back on his feet. Saturday’s American Legion Post 145’s Indiana Blue Star Spirit of Christmas event gave the Air Force veteran and his 13-year-old son, Parker, their first Christmas together, including a family picture with Santa Claus, since the burglary.

“I told Parker to tell Santa what he wanted for Christmas. He said, ‘Dad, I already got everything.’ That’s a pretty special day,” Cass said.

The Cass family was one of 20 military and veterans families from across Indiana that Post 145 of Avon supported in its fourth year of the Spirit of Christmas event. The parents and the nearly 70 children received everything on their Christmas wish list and more, such as stoves, refrigerators, pots and pans, 55-inch televisions, iPads, laptops, mattresses, sofas, clothing, shoes and lots of toys. Many of the presents were wrapped and piled high on tables inside a winter wonderland decorated room at the Hendricks County Fairgrounds in Danville, Ind.

“I couldn’t sleep … the anticipation of the families being here, to go through this incredible day of giving,” said Ralph “Zoc” Zoccolillo, Indiana Blue Star chairman and a Post 145 member in Avon. “That’s what it’s about … giving. There’s no greater gift than to be able to give to someone that’s in need. That’s what (The American Legion) is about.”

The weather was cool and sunny which resulted in a perfect day for Santa and Mrs. Claus to arrive to the Spirit of Christmas event by air -- a Huey. The helicopter circled around the building with its door open and Santa waved to the children and they waved back, jumping in excitement. After landing in an open field, the children along with Santa and Mrs. Claus made their way inside and each family had their photo taken with Santa, Mrs. Claus and Elf Snowflake. The photos were printed and placed in an 8x10 frame.

During the event the children had other pictures taken by a Polar Express train cardboard cutout, and with Spiderman, Indianapolis Indians mascot Rowdie, and with the characters Elsa and Anna from the movie “Frozen.” Elsa and Anna performed two songs from the movie and several of the children came on stage to dance. Then lunch provided by Epicurians Caterers was served.

Before the gifts were delivered, Zoccolillo made a special announcement. He called the parents of Army Spc. James Allen Waters to the stage. Waters, 21, was killed in 2011 in Afghanistan. Zoccolillo presented his parents, Gary and Valerie, with a Gold Star certificate and a specially-made gold and blue star banner. On the banner three blue stars follow a gold star as three of their sons are still serving.

“Most people don’t realize that it’s only 1 percent that serve in the military. We are honored to have four sons that wanted to serve,” Gary said. “They all wanted to join and fight for our country.”

Gary and Valerie had three of their granddaughters with them, and each one received a toy – an American Girl doll.

Then it came time for the children and parents to open presents from Santa as Christmas music played and several youth from the U.S. Naval Sea Cadet Corps carried the gifts to each of the families as they sat at their assigned tables.

“This is our favorite event to do because the cadets are very humbled by this. We love watching the kids open gifts,” said Lt. j.g. Tami Brown, commanding officer of the Arleigh Burke DDG-51 Division Naval Sea Cadet Corps.

With his three daughters running around the table to show him their new toys, Army veteran Jon Smothers said, “This is really the only Christmas they are going to get this year. I’ve had a lot of expenses and things go wrong. The girls are excited about everything they got. And just the time I’ve had here to spend with my daughters has been great. We don’t get this very often.”

As her two oldest children opened dolls, Army apparel and games, Marine veteran Morgan Myers cried. “It’s been a rough year for us, so this means the world to us,” said Myers, whose husband, Joshua, still serves on active duty with the Indiana National Guard. The family also received a new riding lawnmower at the event. “It’s just amazing. This makes me want to go out and give back once I get healthy again. To really get out there and volunteer and put this joy back into someone’s life like it has been put into mine.”