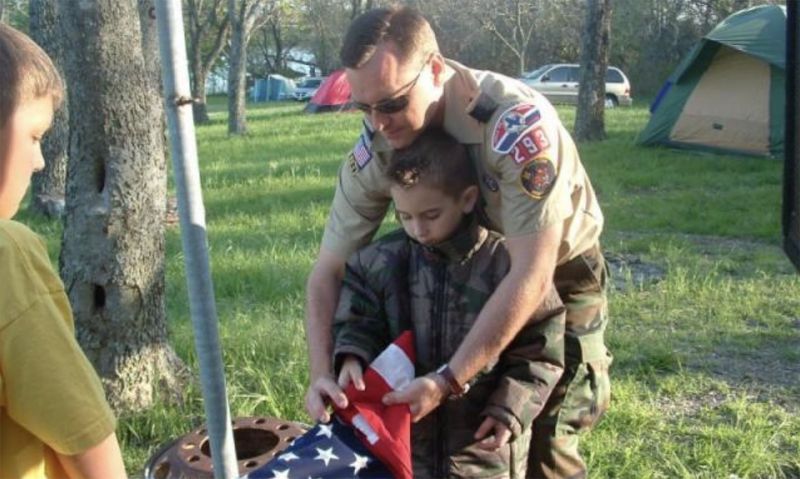 While leaders of Cub Scout Pack 293 and Troop 293 in Anna, Texas, husband and wife Mike and Tricia Mixson taught “respect for the flag to the young boys,” Tricia said.  During spring and fall Scouting campouts, the Scouts were taught how to properly raise, lower and fold the U.S. flag, as well as participate in a flag retirement ceremony.

“These are precious memories I will carry with me for the rest of my life,” Tricia said. The picture above is that of Mike, a Desert Storm veteran and member of American Legion Post 194 in Anna, teaching their son Mikey how to fold a flag at his first Scouting campout in first grade. Tricia shared that Mikey went on to become an Eagle Scout and has enlisted in the U.S. Army, “as have many of the boys we led.”

For his Eagle Scout project in 2018, Mikey noticed that the community of Anna didn’t have a place for locals to retire U.S. flags. So he created a bench that sits outside the local Brookshire’s Grocery Store where the seat raises to house retired flags. And with the help of American Legion Post 194, Mikey identified the names of local servicemembers from all wars who were killed in action or missing in action and put their names on dog tags that line the backrest of the bench.