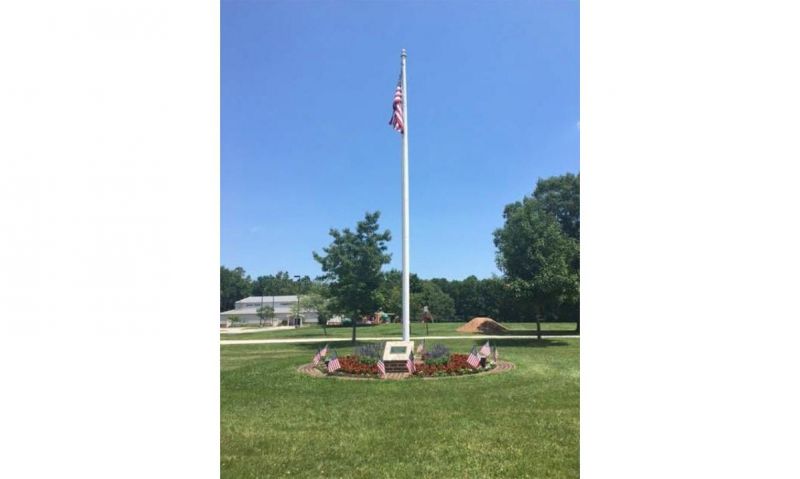 Debby Hyson of Essex, Md., shared with The American Legion that in 1923 a young girl named Evelyn Nadolny attended a two-room schoolhouse in town called Back River School that did not have a flagpole. One morning Evelyn held the American flag in her hands for an outdoor event since there wasn’t a flagpole. Wondering why the school didn’t have one, she told her father, Joe Nadolny, that Back River School needed a flagpole. The wooded property by the schoolhouse was owned by Alex Brown Company and Joe asked for and received permission to cut down a tree, have it shaped into a flagpole, and installed in front of the schoolhouse.

In 1943, a new elementary school was built a few hundred feet from the Back River School. The flagpole was moved to the new school. “For many years, the flag waved proudly, being raised and lowered by the school custodian each day,” Hyson wrote. Sadly, that school was eventually torn down and the flagpole was abandoned. “No longer did Old Glory wave proudly.

“But a thunderstorm and lightning strike caused a nearby tree to crash into the pole and knock it down,” Hyson added. “Did the neighborhood cut it up for firewood? No! Little Evelyn's flagpole was once again restored and rededicated to the YMCA Head Start Center.”

“I passed by that flagpole every morning on my way to work,” Hyson said. “It was so sad to see it without a flag, but extremely hard to recruit someone to raise and lower it every day. What it needed was lights that, according to protocol, could allow the flag to fly continuously.”

So Hyson applied for a local Community Conservation grant and was awarded $10,000 to create a brick garden surrounding the pole and install two lights to illuminate the U.S. flag 24/7. “Every spring the garden is planted with annual flowers that bloom all summer long, always in colors of red, white and blue to complement our flag,” Hyson said. “One day when I thought I was alone, weeding the garden and listening to the snap of the flag in the breeze, a voice made me turn to see a young man just standing there smiling at me.”

Hyson said “Hi” and she said the young man replied, “I just came to thank you. I'm Evelyn Nadolny's grandson. She would have been so happy that her flagpole has been so honored.” Hyson replied, “It was the (American) flag that was honored, thanks to Evelyn's gift to us.”

In 2023, the Essex will celebrate a 100-year-old wood flagpole “that has been through a war of its own; restored many times and loved by many,” Hyson said.