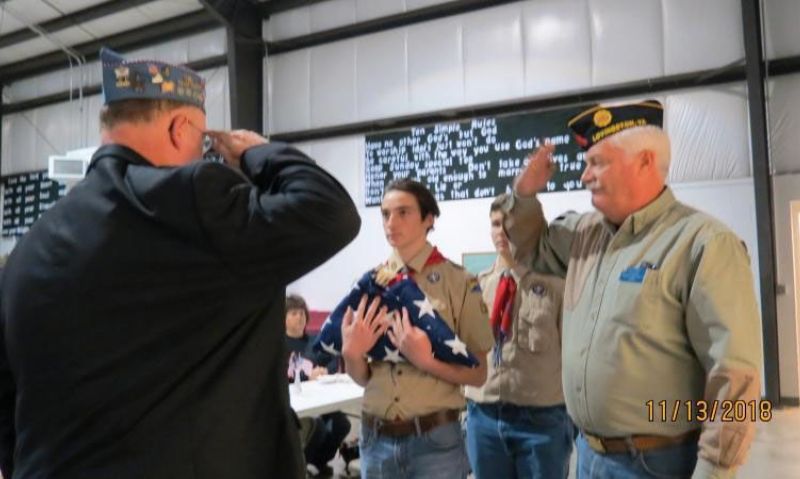 Jay Rarick receives the folded burial flag of his World War I grandfather’s by a Scout. Legiontown.org photo

U.S. Army Pvt. B. Ray Rarick was a World War I veteran who served with Battery A, 108th Field Artillery, 28th Infantry Division. He too was a charter member of American Legion Post 410 in Mifflinburg, Pa.

When Rarick passed away in Chautauqua County, N.Y., in 1985, The American Legion provided military honors for his funeral and presented the family with his burial flag. The flag passed around the family for several decades. It had been unfolded, displayed and refolded incorrectly before it was given to his grandson, Jay Rarick.

An American Legion and military family – Jay’s father served in World War II, his brother is a Vietnam-era veteran, and he a career federal civil service Department of the Army civilian and member of the Sons of The American Legion – “it was important to have his flag folded properly and that The American Legion participate again,” said Jay, commander of Sons Squadron 17 in Lovingston, Va.

American Legion Post 17 “answered the call. They took the opportunity to use refolding the flag as a teaching moment before their annual flag retirement ceremony with the local Boy Scout troop. Under American Legion guidance and narration, the Scouts reverently refolded the flag and presented it back to me.

“From the remarks from the parents afterward, and the Scouts, it was a solemn profound ceremony that made a great impression on these young people.”

Save
Tags: Flag Advocacy, Sons of the Legion