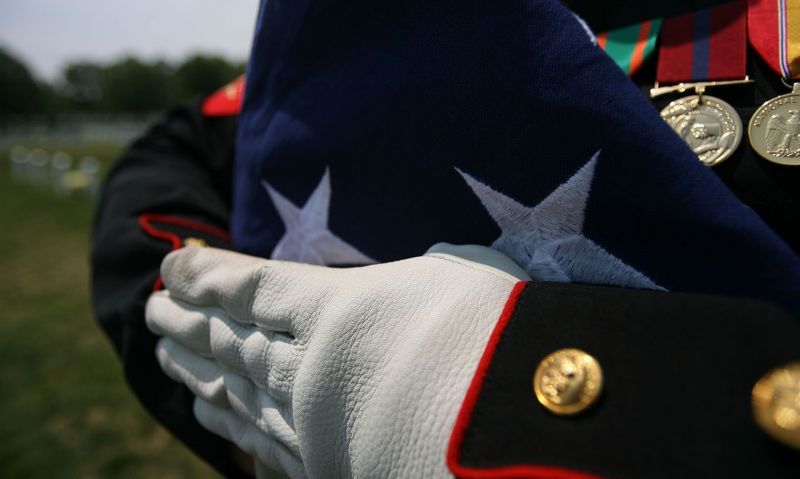 The sunny morning air of spring was filled with the scent from the volley of the last round as taps began to sound out of the sole military trumpet. Six burial guards picked the draped American flag off the coffin and began folding, on cue, with the last blown note.

Attired in full military dress and a black armband around my left arm, hands encased in dress white gloves, I stand at attention saluting the coffin in front of me, ready to receive the triangularly folded flag, stars up.

Stationed with the 6th Army at Fort Lewis, Wash., during the Vietnam conflict, I had been given temporary duty orders to escort a body by train from Oakland, Calif., to Seattle.

Fallen veterans are given honorable military courtesy during their last moments above ground. This includes such items as a fellow soldier of equal rank to accompany the body during the journey overland to the final resting place, saluting each movement of the coffin in the transport process.

We transferred trains to Portland, Ore. I was at the baggage car as the trainmen lifted the burdensome coffin to the dolly. I saluted and began to walk beside the loaded cart as the men pulled it away. One of the men turned to me and stated, “You don't have to do this, we can get it on the other train OK without your help.” I snapped back, "I do it out of respect!”

With this same respect, I accept the folded American flag from the captain of the burial guards. I do an about-face and begin my walk to present to the young, pregnant widow the flag of the country for which her husband gave his life. Each step becomes a burden as I move closer to her. She is seated, dressed in black, crying tears with her grief. I have come to know her and the slain soldier's family after I arrived in Seattle. She and his parents were at the parked silver hearse when I arrived with the coffin at the depot. I was taken under wing and given a place to stay at their home until after the funeral.

Now it has become my duty to present to this young woman our country's flag. I greet her, “Debbie, I present to you the flag of our country that Steve has so graciously laid down his life to defend and so honored by his death.” I hand the flag to her, stars up, salute and do an about-face. In my turn, the sorrow of this touching moment overcomes me, and tears stream down my face.