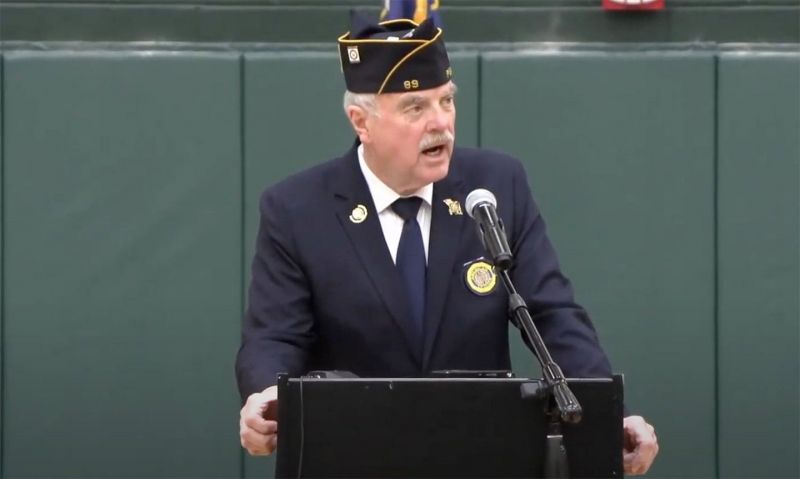 American Legion Van Veen–Van Hemert Post 89 in Pella, Iowa, received an email last December from Maddie Schmitz, a junior at Pella High School. In the email, Schmitz shared that she and her fellow classroom students were reciting the Pledge of Allegiance to the image of a flag printed on an 8x11 piece of laminated paper. Iowa passed legislation in May 2021 that requires schools to administer the Pledge of Allegiance and show the U.S. flag each school day; due to budgetary constraints, Pella High School was not able to provide a flag in every classroom. Schmitz inquired if the post could help in procuring about 60 classroom flags for the high school.

In response, members of Post 89 took the request for U.S. flags in every classroom beyond Pella High School. They provided 175 flags to the Pella Community School District – a flag for every classroom.

“(One) of the easiest decisions, in the years that I have been commander, that ever took place at our American Legion post was providing flags not only for the high school but the whole school district,” said Post 89 Commander Don DeKock during his remarks at Pella High School Feb. 16 for a special flag presentation ceremony. “As a Legion post we felt that once we were asked and really informed of the fact that they didn’t have a flag in each classroom, we just took a hold of it and said, ‘We’re going to do this. And want to do it.’”

“The idea of unity to our country and to each other is important to me (not only because of military veterans in her family) because we live in a great country with great opportunities,” said Schmitz in her remarks. “Regardless of social class, race, religion or beliefs, as Americans we should all have one important thing in common – being united under the ideals of life, liberty and the pursuit of happiness. The American flag is the symbol for this. It does not symbolize the ideals of individuals, but for rather a country who stands together in good times and in bad. It stands for peace, stretching from sea to sea, and a symbol of the price that was paid to allow all of us here to have the freedoms we take for granted. It symbolizes the hope of how far our country has come and how far we will go.

“The American flag is a reminder of the devotion countless men and women have had for each other to live in a country where we can express our thoughts and become what we want to be. Many have made the ultimate sacrifice to protect our country and what it stands for.”

Schmitz thanked Post 89 for “their generosity. Not only for the flags, but for their service to our country.”

Pella High School Principal Adam Beckel added to those sentiments. “A major thank you for the generosity of our American Legion (Post 89) for taking care of us and providing the flags and responding to our ask.”