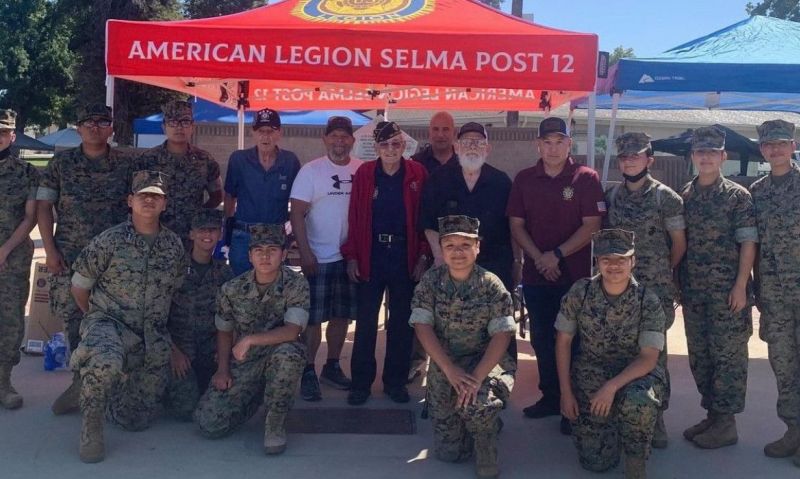 For the past 20 years, American Legion Post 12 in Selma, Calif., has held a flag exchange event in May. The post asks community members to bring their unserviceable American flags to Lincoln Park Veterans Plaza in exchange for a free, new one. This year, the post exchanged over 100 flags on Armed Forces Day, May 21.

The post receives help from Selma High School Marine Corps JROTC cadets who fold every unserviceable flag received. The flags are then given to a local Scouting unit for proper disposal.

“Pretty much the whole community is involved in this. It is a whole community effort with our post,” Post 12 Commander Eliseo Zuniga said. “We are just trying to keep the tradition going.”

The post also gives the Selma District Chamber a box of flags to distribute to visitors who bring in their old ones, and many post members drive around the community with extra flags in their cars to replace tattered ones they see flying.

On Memorial Day, Post 12 holds a ceremony at the Selma Cemetery where they display an Avenue of Flags – burial flags of deceased veterans. This year, 514 flags will be placed that includes eight new ones. The burial flags are given to Post 12 by the veteran’s family. The post sews the veterans name and branch of service on their burial flag before its flown twice a year – Memorial Day and Veterans Day. And they are displayed in alphabetical order to make it easier for family members to locate their loved one.

The tradition for new flags of deceased veterans is to encircle a flag honoring local World War II Medal of Honor recipient William Ralph Shockley. This Memorial Day, the eight new flags will surround Shockley’s flag and Zuniga will speak about each of the veterans, which include a Vietnam War Silver Star recipient and a World War II veteran who flew 35 missions on a B-17 as a gunner.